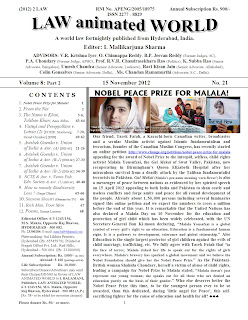 Our friend, Tarek Fatah, a Karachi-born Canadian writer, broadcaster and a secular Muslim activist against Islamic fundamentalism and terrorism, founder of the Canadian Muslim Congress, has recently started an online petition http://www.change.org/petitions/nobel-peace-prize-for-malala appealing for the award of Nobel Prize to the intrepid, selfless, child rights activist Malala Yousufzai, the Gul Makai of Swat Valley, Pakistan, now recuperating in Birmingham’s Queen Elizabeth Hospital after her miraculous survival from a deadly attack by the Taliban fundamentalist terrorists in Pakistan. Gul Makai (Malala’s pen name meaning ‘corn flower’) is also a messenger of peace between nations as evidenced by her spirited speech on 15 April 2012 appealing to both India and Pakistan to shun costly and useless conflicts and forge amity and peace for all round development of the people. Already about 1, 50, 000 persons including several luminaries signed this online petition and we expect the numbers to cross a million before the end of this year. It is remarkable that the United Nations has also declared a Malala Day on 10 November for the education and protection of girl child which has been widely celebrated, with the UN Secretary-General Ban Ki-moon declaring, “Malala Yousafzai is a global symbol of every girl’s right to an education. Education is a fundamental human right. It is a pathway to development, tolerance and global citizenship.” Also Education is the single largest protector of girl children against the evils of child marriage, trafficking, etc. We fully agree with Tarek Fatah that “in the face of terror, Malala risked her life to speak out for the rights of girls everywhere. Malala's bravery has sparked a global movement and we believe the Nobel Foundation should give her the Nobel Peace Prize.” As the Pakistani-British woman Shahida Choudary, herself a victim of abuse of child rights, leading a campaign for Nobel Prize to Malala stated, “Malala doesn’t just represent one young woman; she speaks out for all those who are denied an education purely on the basis of their gender.” Who else deserves better the Nobel Peace Prize this time, to be the youngest person ever to be so awarded, than this dedicated, daring 'little angel for Peace', this self-sacrificing fighter for the cause of education and health for all? §§§
Posted by I.M.Sharma at 7:26 PM No comments: Links to this post