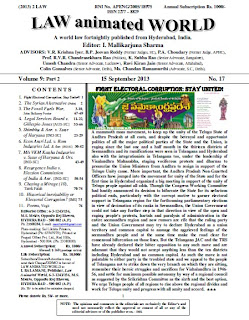 A mammoth mass movement, to keep up the unity of the Telugu State of Andhra Pradesh at all costs, and despite the betrayal and opportunist politics of all the major political parties of the State and the Union, is raging since the last one and a half month in the thirteen districts of Seemandhra and its ramifications were seen in Telangana and Hyderabad also with the integrationists in Telangana too, under the leadership of Visalandhra Mahasabha, staging vociferous protests and dharnas to pressurize the Union Ministers from Andhra to resign in support of the Telugu Unity cause. More important, the Andhra Pradesh Non-Gazetted Officers have jumped into the movement for unity of the State and for the first time in Hyderabad organized a big meeting in support of the unity of Telugu people against all odds. Though the Congress Working Committee had hastily announced its decision to bifurcate the State for its nefarious political ends, particularly with the corrupt motive to garner electoral support in Telangana region for the forthcoming parliamentary elections in view of decimation of its ranks in Seemandhra, the Union Government could not take any further step in that direction in view of the open and raging people’s protests, hartals and paralysis of administration in the entire seemandhra region and now rumors are rife that the ruling party and the Union Government may try to declare Hyderabad as a union territory and common capital to assuage the aggrieved feelings of the seemandhra people and at the same time make the road clear for consensual bifurcation on those lines. But the Telangana JAC and the TRS have already declared their bitter opposition to any such move and are adamant that they would not accept anything less than the ten districts including Hyderabad and no common capital. As such the move is not palatable to either party in the troubled state and we appeal to the people of Telangana not to strike down the very branch on which they are sitting, remember their heroic struggles and sacrifices for Vishalandhra in 1946-56, and settle for maximum possible autonomy by way of a regional council as suggested by the Srikrishna Committee as the sixth and the best option. We urge Telugu people of all regions to rise above the regional divides and work for Telugu unity and progress with all amity and accord.  §§§
Posted by I.M.Sharma at 10:29 PM No comments: