DAY TO CELEBRATE OR MOURN? 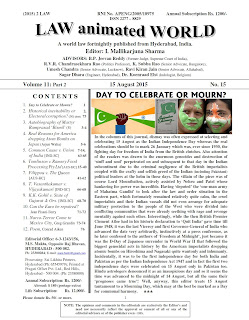 In the columns of this journal, dismay was often expressed at selecting and celebrating 15 August as the Indian Independence Day whereas the real celebrations should be to mark 26 January which was, ever since 1930, the fighting day for freedom of India from the British clutches. Also attention of the readers was drawn to the enormous genocides and destruction of ‘stuff and soul’ perpetrated on and subsequent to that day in the Indian subcontinent due to the criminal negligence of the British imperialists coupled with the crafty and selfish greed of the Indian (including Pakistani) political leaders at the helm in those days. The villain of the piece was of course Lord Mountbatten, actively assisted by Nehru and Patel whose hankering for power was incredible. Having ‘deputed’ the ‘one-man army of Mahatma Gandhi’ to look after the law and order situation in the Eastern part, which fortunately remained relatively quite calm, the cruel imperialists and their Indian vassals did not even arrange for adequate military protection to the people of the West who were divided into conflicting communities that were already seething with rage and revenge mentality against each other. Interestingly, while the then British Premier Clement Atlee had in his historic declaration to ‘Quit India’ gave time till June 1948, it was the last Viceroy and first Governor-General of India who advanced the date very arbitrarily, instinctively at a press conference, as he later confessed to the authors of ‘Freedom at Midnight’, just because it was the D-Day of Japanese surrender in World War II that followed the biggest genocidal acts in history by the American imperialists dropping atomic bombs on Hiroshima and Nagasaki quite wantonly and inhumanly. Incidentally, it was to be the first independence day for both India and Pakistan as per the Indian Independence Act 1947 and in fact the first two independence days were celebrated on 15 August only in Pakistan too. Hindu astrologers denounced it as an inauspicious day and so it seems the time was advanced to the midnight of 14 August, but all the same their ‘prognoses came true’! Well, anyway, this editor treats 15 August tantamount to a Mourning Day, which may at the best be marked as a Day for communal harmony. §§§
Posted by I.M.Sharma at 4:28 PM No comments: Links to this post

ONE EYE FOR MANY EYES 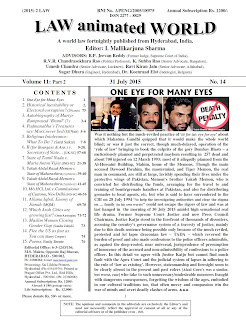 Was it nothing but the much-reviled practice of ‘tit for tat: eye for eye’ about which Mahatma Gandhi quipped that it would make the whole world blind; or was it just the correct, though much-delayed, operation of the ‘rule of law’ bringing to book the culprits of the gory Bombay Blasts – a meticulously planned and perpetrated mayhem resulting in  257 dead and about 700 injured on 12 March 1993: most of it allegedly planned from the Al-Hussaini Building, Mahim, home of the Memons. Though the main accused Dawood Ibrahim, the mastermind, and Tiger Memon, the real man in command, are still at large, lavishly spending their lives under the protective wings of Pakistan, Memon’s brother Yakub Memon, who is convicted for distributing the funds, arranging for the travel to and training of bomb/grenade handlers at Pakistan, and also for distributing grenades to local agents, etc. but who is said to have surrendered to the CBI on 28 July 1994 “to help the investigating authorities and clear the stigma on … family (in his own words)” could not escape the rigors of law and was at last hanged in  the morning of 30 July 2015 amidst high sensational real life drama. Former Supreme Court Justice and now Press Council Chairman, Justice Katju stood in the forefront of thousands of dissenters, accusing the country’s governance system of a travesty of justice, mainly due to this death sentence being possible only because of the much reviled, protested and let lapse draconian law – TADA – which reversed the burden of proof and also made confessions to the police officers admissible, as against the deep-rooted, near universal, jurisprudence of presumption of innocence of the accused and non-admissibility of confessions to a police officer. In this detail we agree with Justice Katju but cannot find much fault with the and the judicial system of lapses in adhering to the rule of ‘law as existing’. However, statesmanship and foresight seem to be clearly absent in the present and past rulers [Afzal Guru’s was a similar, but worse, case] who take to such unnecessary/undesirable measures fraught with dangerous consequences, forgetting the wisdom of the ages, embodied in our cultural traditions too, that often mercy and compassion win the war of minds and avert deadly clashes of arms. §§§
Posted by I.M.Sharma at 4:25 PM No comments: Links to this post 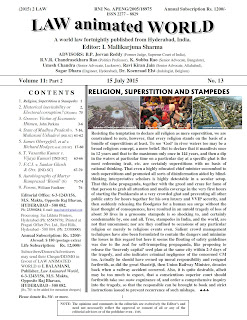 Resisting the temptation to declare all religion as mere superstition, we are constrained to note, however, that every religion stands on the basis of a bundle of superstitions at least. To see ‘God’ in river waters too may be a broad religious concept, a mere belief. But to declare that it manifests once in 12 years and that to the maximum only once in 144 years, and then a dip in the waters at particular time on a particular day at a specific ghat is the most redeeming trait, etc. are certainly superstitions with no basis of rational thinking. That even a highly educated chief minister succumbed to such superstitions and promoted all sorts of disinformation aided by blind-thinking interpretative scholars is highly detestable in a secular setup. That this false propaganda, together with the greed and craze for fame of that person to grab all attention and media coverage in the very first hours of starting the Pushkaralu at a very crowded ghat and preventing all other public entry for hours together for his own luxury and VVIP security, and then suddenly releasing the floodgates for a human sea surge without the least thought of consequences, have resulted in an untold tragedy of loss of about 30 lives in a gruesome stampede is so shocking to, and certainly condemnable by, one and all. True, stampedes in , and the world, are not that uncommon; nor are they confined to occasions of any particular religion or merely to religious events even. Salient crowd management techniques have also been formulated to contain the dangers and minimize the losses in this regard but here it seems the flouting of safety guidelines was due to the zeal for self-trumpeting propaganda, like proposing to release the ‘heavenly capital’ seed plan at the same city within 2-3 days of the tragedy, and also indicates criminal negligence of the concerned CM too. Actually he should have owned up moral responsibility and resigned forthwith, as did the great Shastriji, then Union Railway Minister, decades back when a railway accident occurred. Also, it is quite desirable, albeit  may be too much to expect, that a conscientious superior court should forthwith take suo motu cognizance of, and order a comprehensive inquiry into the tragedy, so that the responsible can be brought to book and strict instructions issued to prevent recurrence of such mishaps.    §§§
Posted by I.M.Sharma at 4:21 PM No comments: Links to this post 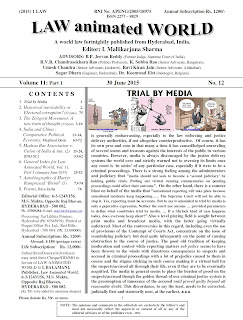 is generally embarrassing, especially to the law enforcing and justice delivery authorities, if not altogether counterproductive.  Of course, it has its own pros and cons in that many a time it has caused/helped unraveling of several scams and treasons against the interests of the public in various countries. However, media is always discouraged by the justice delivery systems the world over and strictly warned not to overstep its limits once any court is ‘in seisin’ of any particular case, especially if it were to be a criminal proceedings. There is a strong feeling among the administrators and judiciary that "media should not seek to become a ‘second judiciary’ by holding public trials. Putting out virtual running commentaries on pending proceedings could affect their outcome".  On the other hand, there is a counter blast on behalf of the media that "sensational reporting will take place because sensational incidents keep happening …. The Supreme Court will not be able to stop it. Yes, reporting must be accurate. But to say it amounted to trial by media is only a pejorative expression. Neither the court nor anyone … provided parameters to define what constitutes trial by media. … If a Shylock kind of case happens today, does everyone keep silent?" Also a level playing field is sought between print media and broadcast media, with the latter going virtually unfettered. Most of the controversies in this regard, including even the use of provisions of the Contempt of Courts Act, concentrate on the issue of scandalizing judiciary but deal quite infrequently on the point of causing obstruction to the course of justice. The good old tradition of keeping moderation and control while reporting matters sub judice seems to have been thrown to the winds with disastrous consequences to suspects and accused in criminal proceedings with a lot of prejudice caused to them in course and the stigma sticking in such course making it a virtual hell for the suspects/accused all through their life, even if they are to be eventually acquitted. The media in general seems to place the burden of proof on the suspects/accused though the golden thread of our criminal justice system is the presumption of innocence of the accused until proved guilty beyond all reasonable doubt. This discordance, to say the least, needs to be corrected, judicially first and statutorily next, at the earliest. §§§
Posted by I.M.Sharma at 4:17 PM No comments: Links to this post 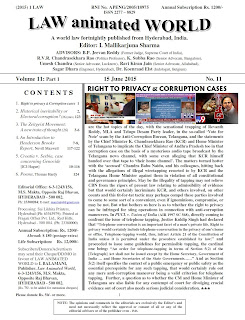 are the hot topics of the day, with the sensational trapping of Revanth Reddy, MLA and Telugu Desam Party leader, in the so-called ‘Vote for Note’ scam by the Anti-Corruption Bureau, Telangana, and the statements by the Chief Minister K. Chandrasekhara Rao (KCR) and Home Minister of Telangana to implicate the Chief Minister of Andhra Pradesh too in that corruption case on the basis of a mysterious audio tape broadcast by the Telangana news channel, with some even alleging that KCR himself handed over that tape to ‘their home channel’. The matters turned hotter with the ‘accused’ Chandra Babu Naidu, and his colleagues, hitting back with the allegations of illegal wiretapping resorted to by KCR and the Telangana Home Minister against them in violation of all constitutional and governance principles. May be the illegality of tapping may not relieve CBN from the rigors of present law relating to admissibility of evidence but that would certainly incriminate KCR, and others involved, on other counts and this tit-for-tat tactic may perhaps compel these parties involved to come to some sort of a convenient, even if ignominious, compromise, or may be not. But what bothers us here is as to whether the right to privacy can be infringed for sting operations in connection with anti-corruption maneuvers. In PUCL v. Union of India (AIR 1997 SC 568), directly coming to confront the issue of telephone tapping, Justice Kuldip Singh had declared that “Telephone conversation is an important facet of a man's private life. Right to privacy would certainly include telephone-conversation in the privacy of one's home or office. Telephone-tapping would, thus, infract Article 21 of the Constitution of India unless it is permitted under the procedure established by law;” and proceeded to issue some guidelines for permissible tapping, the cardinal one being: “An order for telephone-tapping in terms of Section 5(2) of the [Telegraph] Act shall not be issued except by the Home Secretary, Government of India … and Home Secretaries of the State Governments……” And as Section 5(2) itself specifies the context of a public emergency or public safety as the essential prerequisite for any such tapping, that would certainly rule out any mere anti-corruption maneuver being a valid criterion for telephone tapping.  Further, a question as to whether the CM and Home Minister of Telangana are also liable for any contempt of court for divulging crucial evidence out of court also needs serious judicial consideration. §§§
Posted by I.M.Sharma at 4:13 PM No comments: Links to this post