WHY THIS UNDUE HASTE TO VIVISECT?

The Group of Ministers set up by the vile, minority UPA government at the centre, surviving on the mercy of two outside parties – BSP and SP, the latter openly opposed to the division of Andhra Pradesh, is running in all speed to somehow achieve its despicable goal of vivisecting a vibrant nationality and à la Radcliffe. I am reminded of this exquisite poem by Auden lampooning the unholy exercise of that British law lord who never visited India but yet vivisected it drawing his line literally even across the middle of remote human habitations: “Shut up in a lonely mansion/ with police night and day / patrolling the gardens to keep / assassins away, He got down to work, to the task / of settling the fate of millions. The maps at his disposal / were out of date / And the Census returns almost certainly incorrect, But there was no time to check / them, no time to inspect / Contested areas. The weather was frightfully hot, And a bout of dysentery kept him constantly on the trot, / BUT IN SEVEN WEEKS IT WAS DONE, the frontiers decided, A CONTINENT FOR BETTER OR WORSE DIVIDED…” Does this sound very familiar in our context? The British imperialists certainly had their stakes in such a hasty ‘divide and rule’ policy to which both Nehru and Patel unashamedly acquiesced thus defying and shaming their leader, Gandhi, who had declared the partition could happen only on his corpse; and he too would compromise later to sail with his disciples. But what need there is for any independent and patriotic rulers of sovereign to thus divide and rule over a vibrant nationality which has sailed united amidst all troubles and calamities for about six decades? Have they forgotten that India is in essence a multi-national country though its constitution proclaims it a nation-state and any undue impetuous interference with the unity in diversity of the country and the identity and self-respect of its component units, especially of linguistic nationalities, could do utmost damage to the unity and integrity of the entire country itself. Don’t they know that by such post-haste they are only opening up a Pandora’s Box of more complex problems all over the country and striking at the very roots of territorial integrity of the country? No, knowing fully well, they are still moving – for nothing but nefarious electoral benefits – an acute case of open electoral corruption with the next general elections just round the corner. §§§
Posted by I.M.Sharma at 11:59 PM No comments: Links to this post

Posted by I.M.Sharma at 11:09 AM No comments: Links to this post

http://www.youtube.com/v/T6cbHK8VAV0?version=3&autohide=1&autoplay=1&attribution_tag=Sz2eX9qjAhqFcCt8d0l_Og&autohide=1&showinfo=1&feature=share
Posted by I.M.Sharma at 11:06 AM No comments: Links to this post 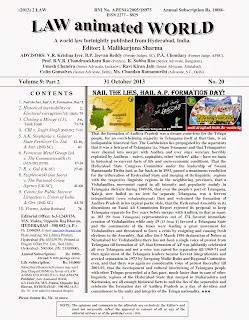 Posted by I.M.Sharma at 10:09 AM No comments: Links to this post

That the formation of Andhra Pradesh was a dream-come-true for the Telugu people, for an overwhelming majority in Telangana itself at that time, is an indisputable historical fact. The Goebbelsian lies propagated by the separatists that it was a betrayal of Telangana [i.e. Nizam Telangana] and that Telanganites were cheated into merger with Andhra and ever since were/are horribly exploited by Andhras – rulers, capitalists, other ‘settlers’ alike – have no basis in historical or current facts of life and socio-economic conditions. That the Hyderabad State Congress Committee under the leadership of Swami Ramananda Tirtha had, as far back as in 1953, passed a unanimous resolution for the trifurcation of Hyderabad State and merging of its linguistic  regions with the respective linguistic regions in the neighboring provinces, that a Vishalandhra movement raged in all intensity and popularity mainly in Telangana districts during 1949-56, that even the people’s poet of Telangana, Kaloji, now hailed as an icon for separate Telangana, was a fervent integrationist (veera vishalandhravadi) then and welcomed the formation of Andhra Pradesh in his typical poetic style, that the Hyderabad Assembly in its discussions on Fazal Ali Commission Report rejected its proposal to keep Telangana separate for five years before merger with Andhra, in that as many as 103 [59 from Telangana] representatives out of 174 favored immediate creation of Vishalandhra while only 29 [15 from T] favored a Telangana State and the communists of the times were leading a great movement for Vishalandhra and threatened to force a crisis by resigning and causing fresh elections to the Assembly, that after the 5 March 1956 declaration of Nehru at Nizamabad for Vishalandhra there has not been a single voice of protest from Telangana till formation of AP, that formation of AP was jubilantly celebrated all over Telangana and not a voice was raised for separation till 1969-71 and then again most of the Telangana leaders became fervent integrationists and averted separation in 1973 by foregoing Mulki Rules and Regional Committee even, and that there was again no considerable voice of protest thereafter till 2001-02, that the development and cultural intermixing of Telangana people with other Telugus proceeded at a fast pace, much faster than in case of other linguistic regions of the Hyderabad State that merged in Maharashtra and Karnataka, are all enough historical facts to nail the lies of the separatists and celebrate the formation day of Andhra Pradesh as a day of devotion and commitment to the unity and integrity of the Telugu nationality. §§§
Posted by I.M.Sharma at 10:05 AM No comments: Links to this post