THE MAY DAY MESSAGE 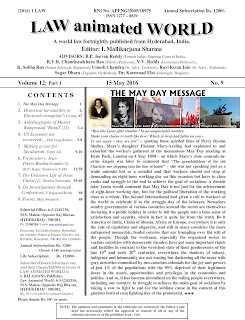 Ye are many – they are few” – quoting these spirited lines of Percy Bysshe Shelley, Marx’s daughter Eleanor Marx-Aveling had explained to and exhorted the workers gathered at the momentous May Day meeting at Hyde Park, London on 4 May 1890 – on which Marx’s close comrade-in-arms Engels was later to comment that “The grandchildren of the old Chartists are stepping into the line of battle” – she was not speaking just as a trade unionist but as a socialist and that workers should not stop at demanding an eight-hour working day on this occasion but have to close ranks and struggle to the end to achieve the goal of socialism. A decade later Lenin would comment that May Day is not just for the achievement of eight-hour working day, but for the political liberation of the working class as a whole. The Second International had given a call to workers of the world to celebrate it as the struggle day of the laborers. Nowadays sundry governments of various countries around the world are themselves declaring it a public holiday in order to lull the people into a false sense of satisfaction and security, which in fact is quite far from the truth. Be it or , or , Africa or , everywhere it is only the rule of capitalists and oligarchy, and still in many countries the more antiquated monarchic, feudal coteries that are trampling over the will of the people. Though the workmen, especially the organized sector in various countries with democratic facades, have got some important rights and facilities in contrast to the wretched state of their predecessors of the late 19th and early 20th centuries, everywhere the shadows of misery, indigence and inhumanity are not waning but darkening all the more with gory atrocities committed by neo-cons/neo-colonials for the joy and powers of just 1% of the populations with the 99% deprived of their legitimate share in the assets, opportunities and privileges in the economies and polities. And so, it has become incumbent on the toiling people everywhere, including our country, to struggle to achieve the main goal of socialism by taking a vow to fight to end for the sublime cause in the context of this glorious festival cum fighting day of the proletariat. §§§
Posted by I.M.Sharma at 1:31 AM No comments: 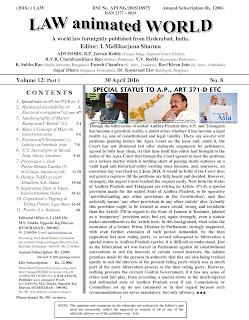 Though the bifurcation of united Andhra Pradesh into A.P. and Telangana has become a practical reality, a doubt arises whether it has become a legal reality i.e. one of constitutional and legal validity. There are several writ petitions pending before the on the issue and, mind it, the Court has not dismissed but after elaborate arguments by petitioners, agreed to fully hear them. At that time itself this editor had brought to the notice of the Apex Court that though the Court agreed to hear the petitions on a serious matter which is nothing short of passing death sentence on a valid legal and historical entity existing since decades, and, moreover, an execution day was fixed on 2 June 2014, it would be futile if the Court does not grant a reprieve till the petitions are fully heard and decided. However, strangely, the august Court trashed the request easily. Now both the States of Andhra Pradesh and Telangana are relying on Article 371-D, a special provision made for the united State of Andhra Pradesh, to be operative ‘notwithstanding any other provisions in the Constitution’, and that naturally means ‘any other provisions in any other statute’ also. Actually this provision ought to be treated as more sound, strong and inviolable than the Article 370 in regard to the State of Jammu & Kashmir, labeled as a ‘temporary’ provision only; but yet, again strangely, even a statute makes amendments to the Article here. In this background, what value the assurance of a former Prime Minister in Parliament, strongly supported, with even further extension of such period demanded, by the then opposition but now ruling party, to accord subsequent to bifurcation a special status to Andhra Pradesh carries, it is difficult to understand. Just as the bifurcation act was forced in Parliament against all constitutional conventions to suit the interests of certain vested interests, the solemn promises made by the persons in authority that day are also being trashed openly to suit the interests of the present ruling party which was as much part of the nasty bifurcation process as the then ruling party. However, nothing prevents the current Central Government, if it has any sense of ethics and fair-play, from according a special status to the much-injured and defrauded state of Andhra Pradesh even if any Commissions or Committees set up do not commend so in that regard because such recommendations are never mandatory, but only advisory. §§§
Posted by I.M.Sharma at 1:10 AM No comments: 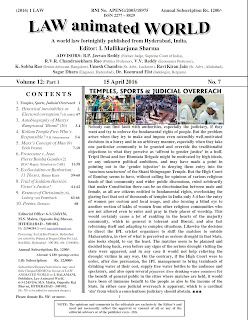 Nobody can find fault with authorities, especially the judiciary, if they want and try to enforce the fundamental rights of people. But the problem arises when they try to make and impose even ostensibly well-motivated decisions in a hurry and in an arbitrary manner, especially when they take one particular community to be granted and override the traditionalist objections to what they perceive as ‘affront to gender justice’ in a huff. Tripti Desai and her Bhumata Brigade might be motivated by high ideals, or any unknown political ambitions, and may have made a point in pointing out to the ‘gender injustice’ in denying them entry into the ‘sanctum sanctorum’ of the . But the High Court of Bombay seems to have, without calling for opinions of various religious heads of that community and wider public discussions, ruled arbitrarily that under Constitution there can be no discrimination between male and female, as all are citizens entitled to fundamental rights, overlooking the glaring fact that out of thousands of temples in India only 3-4 bar the entry of women per custom and local usage, and also turning a blind eye to another section of lakhs of women from other religious communities who are not allowed even to enter and pray in their places of worship. This would certainly cause a lot of rankling in the hearts of the majority community, which in general is tolerant and liberal, and also fast reforming itself and adapting to complex situations. Likewise the decision to direct the IPL cricket organizers to shift the matches to outside Maharashtra, in view of what is perceived as serious drought in that State, also looks stupid, to say the least. The matches seem to be planned and decided long back, even before any signs of the serious drought visiting the state were apparent, and in any case it would not help relieving the drought victims in any way. On the contrary, if the High Court were to order, after due persuasion, the IPL management to bring trainloads of drinking water at their cost, supply free water bottles to the audience and spectators, and also open several piyaavus (free drinking water counters) for the benefit of general public in the cities where matches are held, it would have been of immense benefit to the people as also to the income of the State. In either case judicial overreach is apparent, which is a cardinal ‘sin’ from which a conscientious judiciary should abstain. §§§
Posted by I.M.Sharma at 1:04 AM No comments: