If poor and deprived people occupy small plots of 50-200 sq yards for residential and living purposes that is treated as a crime and they are mercilessly evicted even after decades of residence and building their homes. But it seems all is proper and legal for these BADA BABUS who encroach and occupy thousands of square yards and build big bungalows to live in luxurious conditions.
So I give a call to all poor and deprived people. Go in thousands and lakhs and forcibly OCCUPY THE ILLEGALLY BUILT KRISHNA RIVER BANK ENCROACHMENT BUNGALOWS!
I know I have no party or following but as a conscientious democratic progressive secular citizen I think my call will have some value and some influence. If it carries, I will be very much pleased.

THE WORLD BOWS IN REVERENCE 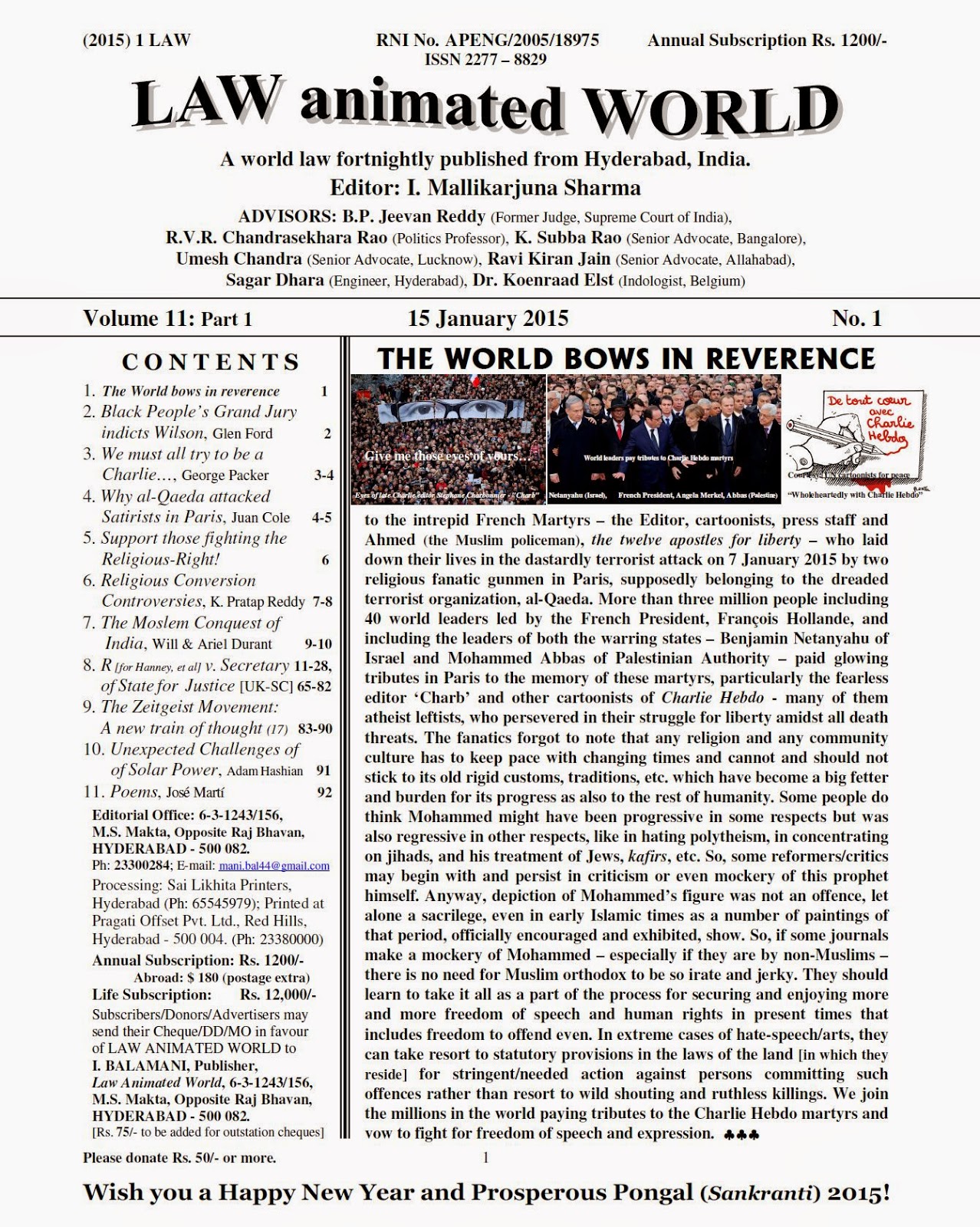 to the intrepid French Martyrs – the Editor, cartoonists, press staff and Ahmed (the Muslim policeman), the twelve apostles for liberty – who laid down their lives in the dastardly terrorist attack on 7 January 2015 by two religious fanatic gunmen in Paris, supposedly belonging to the dreaded terrorist organization, al-Qaeda. More than three million people including 40 world leaders led by the French President, François Hollande, and including the leaders of both the warring states – Benjamin Netanyahu of Israel and Mohammed Abbas of Palestinian Authority – paid glowing tributes in Paris to the memory of these martyrs, particularly the fearless editor ‘Charb’ and other cartoonists of Charlie Hebdo - many of them atheist leftists, who persevered in their struggle for liberty amidst all death threats. The fanatics forgot to note that any religion and any community culture has to keep pace with changing times and cannot and should not stick to its old rigid customs, traditions, etc. which have become a big fetter and burden for its progress as also to the rest of humanity. Some people do think Mohammed might have been progressive in some respects but was also regressive in other respects, like in hating polytheism, in concentrating on jihads, and his treatment of Jews, kafirs, etc. So, some reformers/critics may begin with and persist in criticism or even mockery of this prophet himself. Anyway, depiction of Mohammed’s figure was not an offence, let alone a sacrilege, even in early Islamic times as a number of paintings of that period, officially encouraged and exhibited, show. So, if some journals make a mockery of Mohammed – especially if they are by non-Muslims – there is no need for Muslim orthodox to be so irate and jerky. They should learn to take it all as a part of the process for securing and enjoying more and more freedom of speech and human rights in present times that includes freedom to offend even. In extreme cases of hate-speech/arts, they can take resort to statutory provisions in the laws of the land [in which they reside] for stringent/needed action against persons committing such offences rather than resort to wild shouting and ruthless killings. We join the millions in the world paying tributes to the Charlie Hebdo martyrs and vow to fight for freedom of speech and expression.  §§§
Posted by I.M.Sharma at 10:43 AM No comments:

A THINK TANK MINUS PLANNING 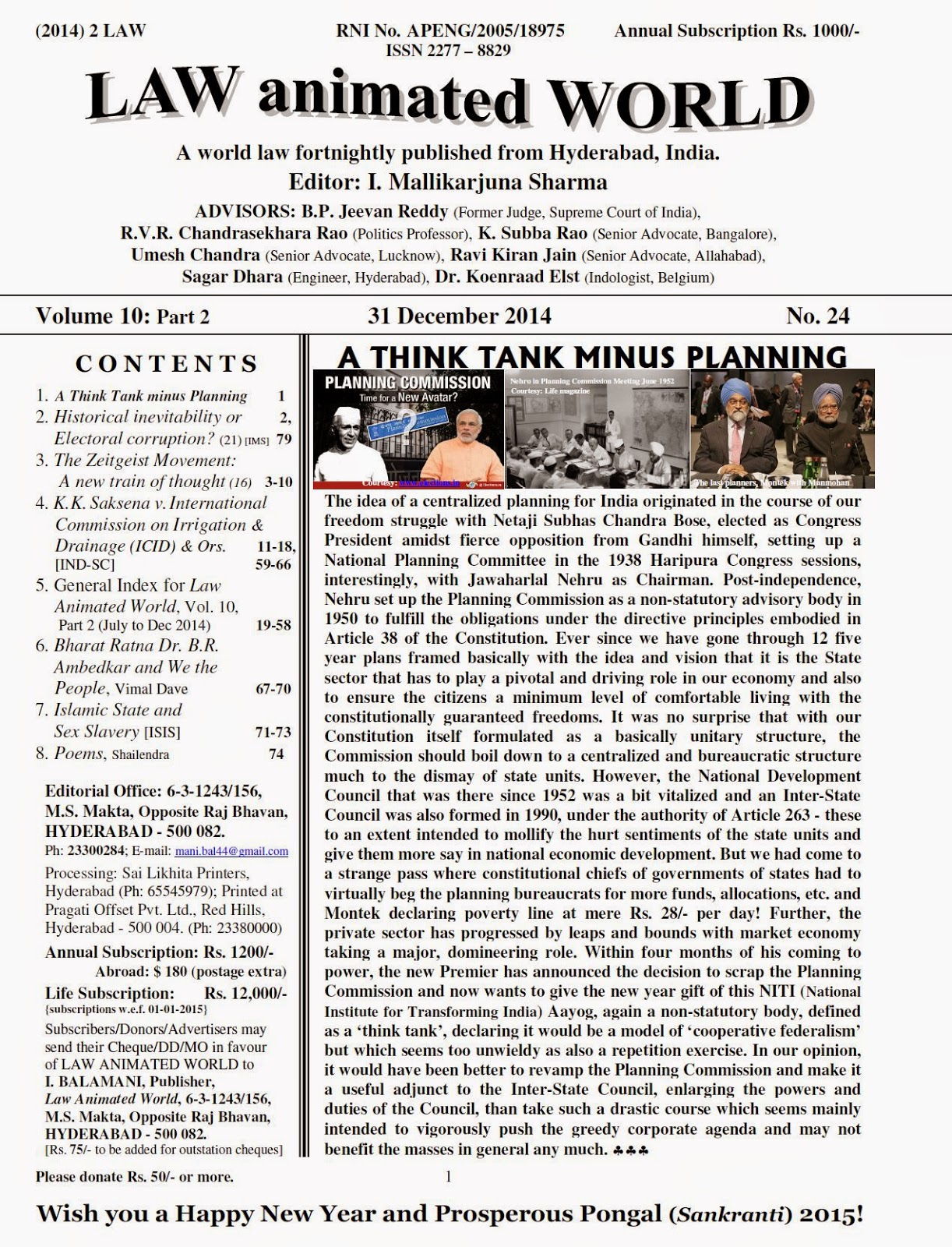 The idea of a centralized planning for India originated in the course of our freedom struggle with Netaji Subhas Chandra Bose, elected as Congress President amidst fierce opposition from Gandhi himself, setting up a National Planning Committee in the 1938 Haripura Congress sessions, interestingly, with Jawaharlal Nehru as Chairman. Post-independence, Nehru set up the Planning Commission as a non-statutory advisory body in 1950 to fulfill the obligations under the directive principles embodied in Article 38 of the Constitution. Ever since we have gone through 12 five year plans framed basically with the idea and vision that it is the State sector that has to play a pivotal and driving role in our economy and also to ensure the citizens a minimum level of comfortable living with the constitutionally guaranteed freedoms. It was no surprise that with our Constitution itself formulated as a basically unitary structure, the Commission should boil down to a centralized and bureaucratic structure much to the dismay of state units. However, the National Development Council that was there since 1952 was a bit vitalized and an Inter-State Council was also formed in 1990, under the authority of Article 263 - these to an extent intended to mollify the hurt sentiments of the state units and give them more say in national economic development. But we had come to a strange pass where constitutional chiefs of governments of states had to virtually beg the planning bureaucrats for more funds, allocations, etc. and Montek declaring poverty line at mere Rs. 28/- per day! Further, the private sector has progressed by leaps and bounds with market economy taking a major, domineering role. Within four months of his coming to power, the new Premier has announced the decision to scrap the Planning Commission and now wants to give the new year gift of this NITI (National Institute for Transforming India) Aayog, again a non-statutory body, defined as a ‘think tank’, declaring it would be a model of ‘cooperative federalism’ but which seems too unwieldy as also a repetition exercise. In our opinion, it would have been better to revamp the Planning Commission and make it a useful adjunct to the Inter-State Council, enlarging the powers and duties of the Council, than take such a drastic course which seems mainly intended to vigorously push the greedy corporate agenda and may not benefit the masses in general any much. §§§

Wish you a Happy New Year and Prosperous Pongal (Sankranti) 2015!
Posted by I.M.Sharma at 11:52 AM No comments:

A FRIEND, PHILOSOPHER AND GUIDE 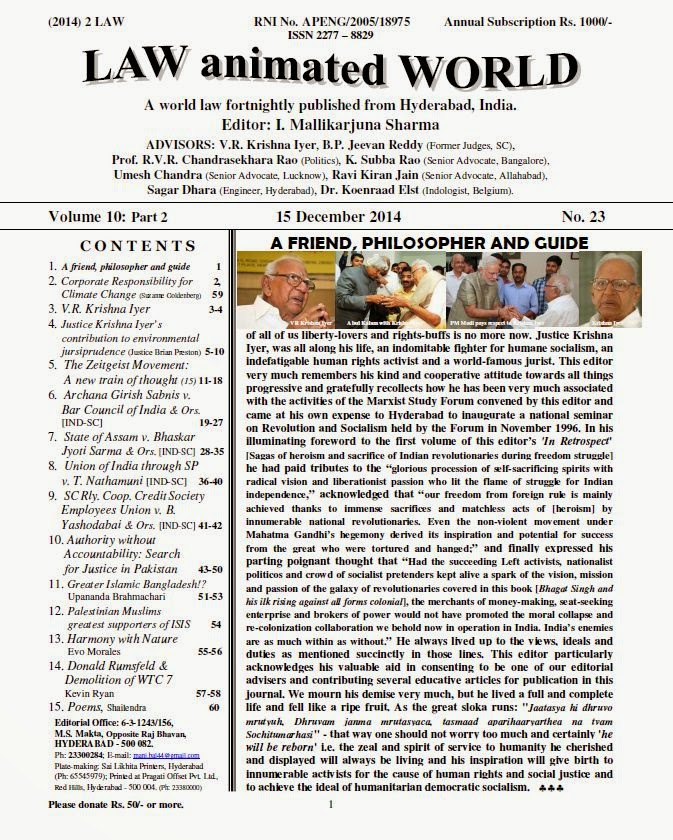 of all of us liberty-lovers and rights-buffs is no more now. Justice Krishna Iyer, was all along his life, an indomitable fighter for humane socialism, an indefatigable human rights activist and a world-famous jurist. This editor very much remembers his kind and cooperative attitude towards all things progressive and gratefully recollects how he has been very much associated with the activities of the Marxist Study Forum convened by this editor and came at his own expense to Hyderabad to inaugurate a national seminar on Revolution and Socialism held by the Forum in November 1996. In his illuminating foreword to the first volume of this editor’s 'In Retrospect' [Sagas of heroism and sacrifice of Indian revolutionaries during freedom struggle] he had paid tributes to the “glorious procession of self-sacrificing spirits with radical vision and liberationist passion who lit the flame of struggle for Indian independence,” acknowledged that “our freedom from foreign rule is mainly achieved thanks to immense sacrifices and matchless acts of [heroism] by innumerable national revolutionaries. Even the non-violent movement under Mahatma Gandhi’s hegemony derived its inspiration and potential for success from the great who were tortured and hanged;” and finally expressed his parting poignant thought that “Had the succeeding Left activists, nationalist politicos and crowd of socialist pretenders kept alive a spark of the vision, mission and passion of the galaxy of revolutionaries covered in this book [Bhagat Singh and his ilk rising against all forms colonial], the merchants of money-making, seat-seeking enterprise and brokers of power would not have promoted the moral collapse and re-colonization collaboration we behold now in operation in India. ’s enemies are as much within as without.” He always lived up to the views, ideals and duties as mentioned succinctly in those lines. This editor particularly acknowledges his valuable aid in consenting to be one of our editorial advisers and contributing several educative articles for publication in this journal. We mourn his demise very much, but he lived a full and complete life and fell like a ripe fruit. As the great sloka runs: "Jaatasya hi dhruvo mrutyuh, Dhruvam janma mrutasyaca, tasmaad aparihaaryarthea na tvam Sochitumarhasi" - that way one should not worry too much and certainly 'he will be reborn' i.e. the zeal and spirit of service to humanity he cherished and displayed will always be living and his inspiration will give birth to innumerable activists for the cause of human rights and social justice and to achieve the ideal of humanitarian democratic socialism.   §§§
Posted by I.M.Sharma at 11:48 AM No comments: