The lethal firing on 15-02-2012 by the two Italian marines – Salvatore Girone and Massimilano Latorre – of an Italian Navy Vessel Protection Department (VPD) on board the Italian oil tanker MV Enrica Lexie on fishermen aboard the Tamil Nadu Fishing boat ‘St. Antony’ off the Kerala shores, probably mistaking them to be pirates, which has taken the lives of two fishermen – Ajesh Binki and Valentine aka Gelastine – has stirred up a hornet’s nest of controversies. Admittedly the Indian boat was not flying an Indian or any other flag, and was in the high seas [and that illegally, it seems] – in the contiguous zone at some 20.5 nautical miles from the coastal baseline – whereas the Italian ship, flying the Italian flag, was protected by a detachment of Italian marines to counter any danger from piracy on the high seas. The flag ship principle that a ship on the high seas is a floating island belonging to the nation whose flag she is flying makes the Italian ship basically come under the Italian jurisdiction. As such, the duty/function of proceeding with criminal charges on the marines or acclaiming them for their anti-piracy action, whichever be the case, ought to primarily belong to and not .
However, on the plea that two fishermen were killed when aboard a fishing boat registered in India and that some central government notifications had extended the applicability of section 4 of the Indian Penal Code and of Section 188/188A of Criminal Procedure Code to the contiguous zone and specifically notified areas in the exclusive economic zone, the Kollam police and Kollam Magistrate exercised jurisdiction, lured the Italian ship which was going away towards Djibouti, and was already at about 39 plus nautical miles, to come back for discussions on the piracy problem. But once they had anchored at Kochi, the two Italian marines were arrested, remanded to judicial custody for several days before the Italian consulate staff intervened and bail was secured for them under strict conditions. Italy complains that detention of their marines, enjoying strict sovereign or functional immunity under international as also Italian law, is arbitrary, excessive and violates the fundamental rights under Articles 14 and 21 of the Indian Constitution even.
The matter has gone finally to the Supreme Court which delivered its judgment on 18 January 2013 with Mr. Justice Altamas Kabir, CJI and Mr. Justice J. Chelameswar, J delivering separate opinions, but concurring on the main point that the Kollam Court or State of Kerala never had any jurisdiction in this case; and held that the Government of India has such jurisdiction and has to set up a special court for the purpose; they transferred the marines from Kerala to Delhi, virtually detaining them within the bounds of the capital city. While the CJI appears sympathetic to the arguments of Mr. Harish N. Salve for Italians, Chelameswar J brushes aside those contentions declaring ‘sovereignty is not given but asserted’. However, can this our sovereignty infringe the sovereign powers of another nation in an admittedly high sea zone, which does not strictly come under India’s maritime zone, is the basic question and the matter ought to have been, and even now ought to be, left for decision by an international arbitration tribunal or the International Court of Justice. I also feel the high drama enacted subsequently – by first the Italian government refusing to send back the marines, given permission by the Supreme Court to go to Italy for voting in elections but come back by 22 March or so, and later our Apex Court threatening action against the Italian Ambassador in India and passing orders restraining his leaving the country – an unusual and unwarranted step violating all internationally accepted norms as also stipulations of the Vienna Convention in this regard, etc., and later the Italian Government succumbing to pressure and sending back the marines on certain explicit/implicit promises by the Indian government, etc. which led to much furor in Italy and even resignation of their foreign minister in protest, etc. – could have been avoided if the Supreme Court had, in pursuance of its own finding that State of Kerala has no jurisdiction, held that whatever was done in the past – especially the detention of the Italian marines – was regrettable, released them from all trammels save any future proceedings for their extradition by the Government of India if and when it institutes a special Court to deal with the matter. The Indian government and courts seem to have violated some basic norms of customary international law in this case.

LET US MOVE FORWARD
with their majestic memories inspiring our hearts and guiding our minds but certainly not in a copycat/fatuous manner. Venerate our veterans we must, especially the heroic martyrs like Bhagat Singh, Chandrasekhar Azad, Surya Sen, et al, but in our efforts  to build a socialist democracy we should be ingenious and innovative even if that means non-agreement with any or much that has been said or done by them. It is to be noted that those pioneers themselves differed considerably on what has to be done subsequent to the end of the foreign rule though all of them were one in their enthusiasm to end that rule. Whereas the Kakori conspiracy case veteran Manmathnath Gupta had become a sort of an independent Marxist in course of time, his own brother, another veteran freedom fighter, Manmohan Gupta was a decidedly anti-Marxian socialist as regards the ways and means to build post-independent India. Whereas the still earlier Sachindranath Sanyal of the Bandi Jiwan fame was a sort of an Indianized socialist revolutionary seeking to harmonize the philosophies of the ancient Indian Rishis and the modern materialist Karl Marx, his younger brother Jitendranath Sanyal was chums with Bhagat Singh – a national anarchist turned Marxist socialist. Of course, not many know about the transformation of the dedicated nationalist revolutionary Bhagat Singh from his earlier Vaillant-following anarchist bent to the later Leninist trend. In this context we respect, though not concur with, the criticism of Bhagat Singh by Dr. Koenraad Elst that we have published in this issue. Revere but criticize, admire but contrast, and always think and act creatively is our spirited suggestion in this regard. That a variety of socialism established or tried to be built in about one-third of the world, called ‘state socialism’, failed and is now shunned by right-thinking humanists and democrats for its oppressive perversions doesn’t mean that the ideal/ideology of socialism itself failed. Subsequent to the recent crisis in world economy ever since the 2008 meltdown, even stalwart pro-capitalist scholars are acknowledging the merits of Marx and his prognosis, and some even query: ‘Marx has come back!?’ If we understand that socialism itself is an evolving ideology basically aiming at a social transformation beneficial to all human beings and the environs, then we don’t think there need be much hesitation in welcoming it; but at the same time, though steadfast, we must also be pragmatic and flexible enough in our struggles to achieve it.  §§§
Posted by I.M.Sharma at 11:54 AM 3 comments: Links to this post 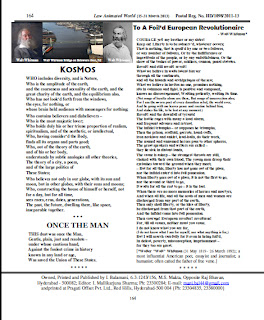 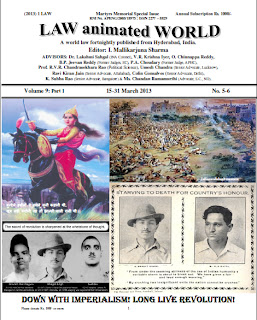 Posted by I.M.Sharma at 11:50 AM No comments: Links to this post