LET US NOT DILUTE OUR TOLERANCE! 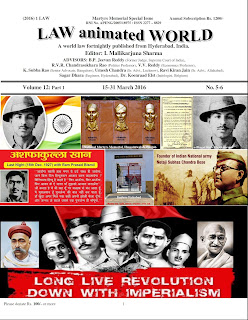 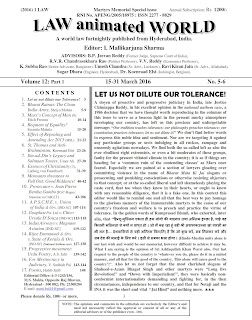 A doyen of proactive and progressive judiciary in India, late Justice Chinnappa Reddy, in his excellent opinion in the national anthem case, a 1986 decision that we have thought worth reproducing in the columns of this issue to serve as a beacon light in the present murky atmosphere enveloping our country, has left us this precious and unforgettable message: “Our tradition teaches tolerance; our philosophy preaches tolerance; our constitution practices tolerance; let us not dilute it!” We don’t find better words to express this noble idea and sentiment. Nor are we targeting it against any particular groups or sects indulging in all ruckus, rampage and unseemly agitations nowadays. We find both the so-called left as also the ever ebullient right extremists, or even a bit moderates of these groups, faulty for the present vitiated climate in the country; it is as if things are heading for a ‘common ruin of the contending classes’ as Marx once feared. Especially we are pained at a section of lawyers gloating over committing violence in the name of Bharat Mata Ki Jai slogans or prosecuting and punishing conscientious or otherwise resisting objectors to that concept; or at the so-called liberal and left shamelessly playing the caste card, that too when they know in their hearts, or ought to know with any reasonable diligence, that it is a fake one. In this context this editor would like to remind one and all that the best way to pay homage to the glorious memory of the innumerable martyrs to the cause of our country’s freedom and welfare is to preach and practice the virtue of tolerance. In the golden words of Ramprasad Bismil, who exhorted, inter alia, that “हिन्दू-मुस्लिम एकता ही हम लोगों की यादगार तथा अन्तिम इच्छा है, चाहे वह कितनी कठिनता से क्यों न प्राप्‍त हो । जो मैं कह रहा हूं वही श्री अशफाकउल्ला खां वारसी का भी मत है… देशवासियों से यही अन्तिम विन[ति] है कि जो कुछ करें, सब मिलकर करें और सब देश की भलाई के लिए करें । इसी से सबका भला होगा । {Hindu-Muslim unity alone is our last wish and would be our memorial, however difficult to achieve it may be. What I am saying is the opinion of Sri Ashfaqullah Khan Warsi also. Our last request to the people of the country is ‘whatever you do, please do it in a united manner, and all that for the good of the country. This alone will cause good to the country’}”. Also let us not forget that the most cherished slogans of Shaheed-e-Azam Bhagat Singh and other martyrs were “Long live Revolution!” and “Down with Imperialism!”, they were basically non-conformist internationalists demanding and fighting for, in the then circumstances, independence to our country, and that for Netaji and the INA it was the short and vital  “Jai Hind” and nothing more. §§§
Posted by I.M.Sharma at 6:41 PM No comments:

FOR A UNITED STATES OF 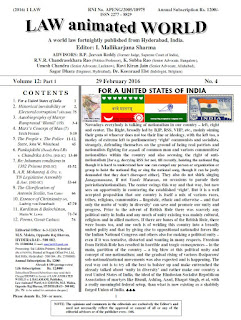 Nowadays everybody is talking of nationalism in our country – left, right and center. The Right, broadly led by BJP, RSS, VHP, etc., mainly aiming their guns at whoever does not toe their line or ideology, with the left too, a motley of extreme left to parliamentary ‘right’ communists and socialists, strangely, defending themselves on the ground of being real patriots and nationalists fighting for azaadi of common man and various communities/ nationalities within the country and also accusing the right of anti-nationalism [for e.g. decrying RSS for not, till recently, hoisting the national flag though it is hard to understand how one can compel any person or organization or group to hoist the national flag or sing the national song, though it can be justly demanded that they don’t disrespect either]. They also do not shirk singing Janaganamana, if not Vande Mataram, on occasions to parade their patriotism/ nationalism. The center swings this way and that way, but now sees an opportunity in countering the established ‘right’. But it is a well accepted proposition that our country is itself a mix of various races, tribes, religions, communities – linguistic, ethnic and otherwise – and that only the motto of ‘unity in diversity’ can save and promote our unity and progress. Prior to the advent of British Rule there was scarcely any political unity in and any much of unity existing was mainly cultural, religious and in allied matters. If there are banes of the British Rule, there were boons too, and one such is of welding this country into a broadly united polity and that by giving rise to oppositional nationalist forces like the Indian National Congress and others also for making a political unity – even if it was tentative, distorted and wanting in many respects. Freedom from British Rule has resulted in horrible and tragic consequences – in the main, partition of the country – a big blow at this political unity and concept of one-nationalism; and the gradual rising of various fissiparous/ sub-national/national movements was also expected and is happening. The real way out is to try all the best to bolster up and make entrenched the already talked about ‘unity in diversity’ and rather make our country a real United States of India, the ideal of the Hindustan Socialist Republican Association of martyrs like Bismil, Ashfaq, Azad, Bhagat Singh, et al, with a really meaningful federal setup, than what is now existing as a shabbily forged Union of India. §§§
Posted by I.M.Sharma at 6:22 PM No comments: 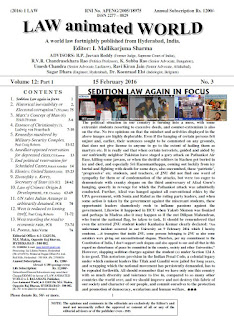 The political situation in our country is turning into a mess, with some extremist students resorting to excessive deeds, and counter-extremism is also on the rise. No two opinions on that the mindset and activities displayed in the above images are highly deplorable. Even if the hanging of certain persons felt unjust and, earlier, their sentences sought to be commuted on any grounds, that does not give license to anyone to go to the extent of hailing them as martyrs etc. It is really sad that when certain terrorists, guided and aided by our unfriendly neighbor Pakistan have staged a gory attack on Pathankot Air Base, killing some jawans, or when the dutiful soldiers in Siachen got buried in ice and died, and especially Sri Hanumanthappa, coming out luckily from icy burial and fighting with death for some days, also succumbed, these ‘patriotic’, ‘progressive’ etc. students, and teachers, of JNU did not find one word of sympathy for them or of condemnation of the attacks, but were too eager to demonstrate with cranky slogans on the third anniversary of Afzal Guru’s hanging, queerly in revenge for which the Pathankot attack was admittedly conducted. Further, Afzal was hanged against all conventional ethics by the UPA government, with Sonia and Rahul as the ruling party leaders, and when some action is taken by the government against the miscreant students, these opportunist leaders shamelessly rush to inflame passions against the government. Likewise it happened in HCU when Yakub Memon was lionized and perhaps in also it may happen so if the nut Dilipan Mahendran, who burnt the national flag, be taken to task. It should be remembered that even the arrested JNU student leader Kanhaiya Kumar clearly declared: “An unfortunate incident occurred in our University on 9 February 2016 which I hereby condemn. …it transpires that inside JNU, some persons belonging to JNU as also some outsiders were giving out unconstitutional slogans. Therefore, per my commitment to the Constitution of , I don't support such slogans and also appeal to one and all that in this regard no disturbance of peace be committed in the country, society and other Universities.” However, slapping sedition charges against the student (s) under Section 124 A is no good. This notorious provision in the Indian Penal Code, a colonial legacy under which eminent leaders like Tilak and Gandhi were jailed for long years, and scrapping which the national movement has persistently demanded, has to be repealed forthwith. All should remember that we have only one this country with so much diversity and tolerance to live in, compared to so many other countries the world over, and we should improve and not destroy this fabric of our society and character of our people, and commit ourselves to the protection and promotion of democracy, secularism and human welfare.  §§§
Posted by I.M.Sharma at 6:16 PM No comments: 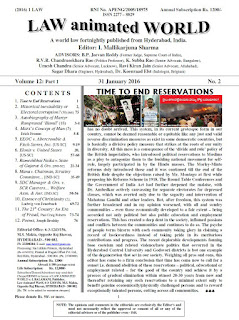 has no doubt arrived. This system, in its current grotesque form in our country, cannot be deemed reasonable or equitable like any just and valid reverse discrimination measures as exist in some democratic countries, but is basically a divisive policy measure that strikes at the roots of our unity in diversity. All this mess is a consequence of the ‘divide and rule’ policy of the British imperialists, who introduced political reservations to Muslims as a ploy to antagonize them to the budding national movement for self-rule, largely participated in by the Hindu masses. The Morley-Minto reforms duly introduced those and it was continued till the end of the British Rule despite the objections raised by Mr. Montagu at first while proposing his Reforms Scheme in 1918. The Round Table Conferences and the Government of Act had further deepened the malaise, with Dr. Ambedkar actively canvassing for separate electorates for depressed classes, which was averted only due to the sagacity and intervention of Mahatma Gandhi and other leaders. But, after freedom, this system was further broadened and in my opinion worsened, with all and sundry communities – even those economically developed to a fair extent – being accorded not only political but also public education and employment reservations. This has created a deep dent in the society, inflamed passions and conflicts between the communities and continues to do so. The psyche of people turns bizarre with each community taking glory in claiming a record of backwardness instead of taking pride in its meritorious contributions and progress. The recent deplorable developments fanning base casteism and related violence/hate politics that occurred in the and districts is but one example of the degeneration that set in our society. Weighing all pros and cons, this editor has come to a firm conclusion that time has come now to call for a sunset i.e. demand abolition of these reservations – political, educational or employment related – for the good of the country and achieve it by a process of gradual elimination within utmost 20-30 years from now and thereafter retaining any such reservations to a minimal extent only to benefit genuine economically/physically challenged persons and to reward exceptionally talented persons, cutting across all communities.      §§§