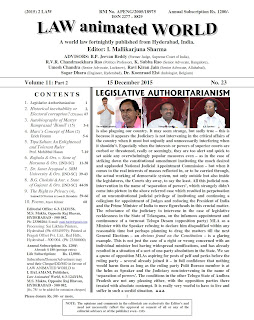 is also plaguing our country. It may seem strange, but sadly true – this is because it appears the Judiciary is not intervening in the critical affairs of the country when it must but unjustly and unnecessarily interfering when it shouldn’t. Especially when the interests or powers of superior courts are curbed or threatened, really or seemingly, they are too alert and quick to set aside any overwhelmingly popular measures even – as in the case of striking down the constitutional amendment instituting the much desired and applauded National Judicial Appointment Commission – but when it comes to the real interests of masses reflected in, or to be carried through, the actual working of democratic system, not only outside but also inside the legislatures, the Courts shy away, to say the least. All this judicial non-intervention in the name of ‘separation of powers’, which strangely didn’t come into picture in the above referred case which resulted in perpetuation of an unconstitutional judicial privilege of instituting and continuing a collegium for appointment of Judges and reducing the President of India and the Prime Minister of India to mere figureheads in this crucial matter. The reluctance of the judiciary to intervene in the case of legislative recklessness in the State of Telangana, on the infamous appointment and continuance of a turncoat Telugu Desam (opposition party) MLA as a Minister with the Speaker refusing to declare him disqualified within any reasonable time but perhaps planning to drag the matters till the next General Elections – an obvious fraud on the Constitution – is a glaring example. This is not just the case of a right or wrong concerned with an individual minister but having widespread ramifications, and has already resulted in a situation of a sort of one-party absolutism in the State. We see a queue of opposition MLAs aspiring for posts of pelf and perks before the ruling party – several already joined it – in full confidence that nothing would harm them as long as the ruling party Polit Bureau member is at the helm as Speaker and the Judiciary non-intervening in the name of ‘separation of powers’. The conditions in the other of Andhra Pradesh are not any pleasing either, with the opposition parties there treated with absolute contempt. It is really very woeful to have to live and suffer in such a sordid situation.  §§§
Posted by I.M.Sharma at 1:16 PM No comments: 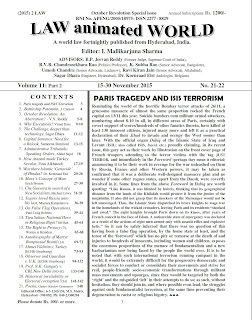 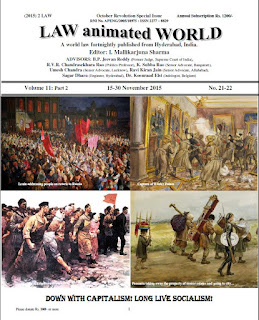 Reminding the world of the horrific terror attacks of 26/11, a gruesome massacre of almost the same proportion rocked the French capital on 13/11 this year. Suicide bombers cum militant armed attackers, numbering about 8-10 in all, in different areas of Paris, certainly with covert support of scores/hundreds of other fanatics therein, have killed at least 130 innocent citizens, injured many more and left it as a practical declaration of their Jihad to invade and occupy the West sooner than later. With the official organ Dabiq of the Islamic State of Iraq and Levant (ISIL; also called ISIS, Daesh etc.) proudly claiming, in its recent issue, this gory act as their work by illustration on the front cover page of  French troopers attending to the terror victims with the tag JUST TERROR, and immediately in the Foreword (perhaps they mean it editorial) announcing it to be their work in revenge for the war unleashed on them by Russia, France and other Western powers, it may be taken as confirmed that it was a deliberate well-designed massacre plan and no wonder if some other rogues states, apart from the Daesh, were covertly involved in it. Some lines from the above Foreword in Dabiq are worth quoting: “Like , it was blinded by hubris, thinking that its geographical distance from the lands of the Khilāfah would protect it from the justice of the mujāhidīn. It also did not grasp that its mockery of the Messenger would not be left unavenged. Thus, the Islamic State dispatched its brave knights to wage war in the homelands of the wicked crusaders, leaving Paris and its residents “shocked and awed.” The eight knights brought down on its knees, after years of French conceit in the face of Islam. A nationwide state of emergency was declared as a result of the actions of eight men armed only with assault rifles and explosive belts.” So it can be safely inferred that there was no question of this having been a false flag operation, by the home state at least, and the tenor of the ‘foreword’ which has no pity or remorse at the death of and injuries to hundreds of innocents, including women and children, exposes the enormous proportions of the menace of fundamentalism and a new barbarianism now being faced by the people the world over. It is to be noted that with such international terrorism running rampant in the world, it would be extremely difficult for the progressive democratic and socialist forces to conduct or consolidate their movements and strive for real, people-friendly socio-economic transformations through militant mass movements and upsurges, since they would be targeted by both the ‘right’ and the misguided ‘left’ in their attempts to do so; as such, without hesitation, they should join in, and where possible even lead, the struggles against such fundamentalist terrorism, at the same time preventing their degeneration to racist or religious bigotry. §§§
Posted by I.M.Sharma at 12:50 PM No comments: