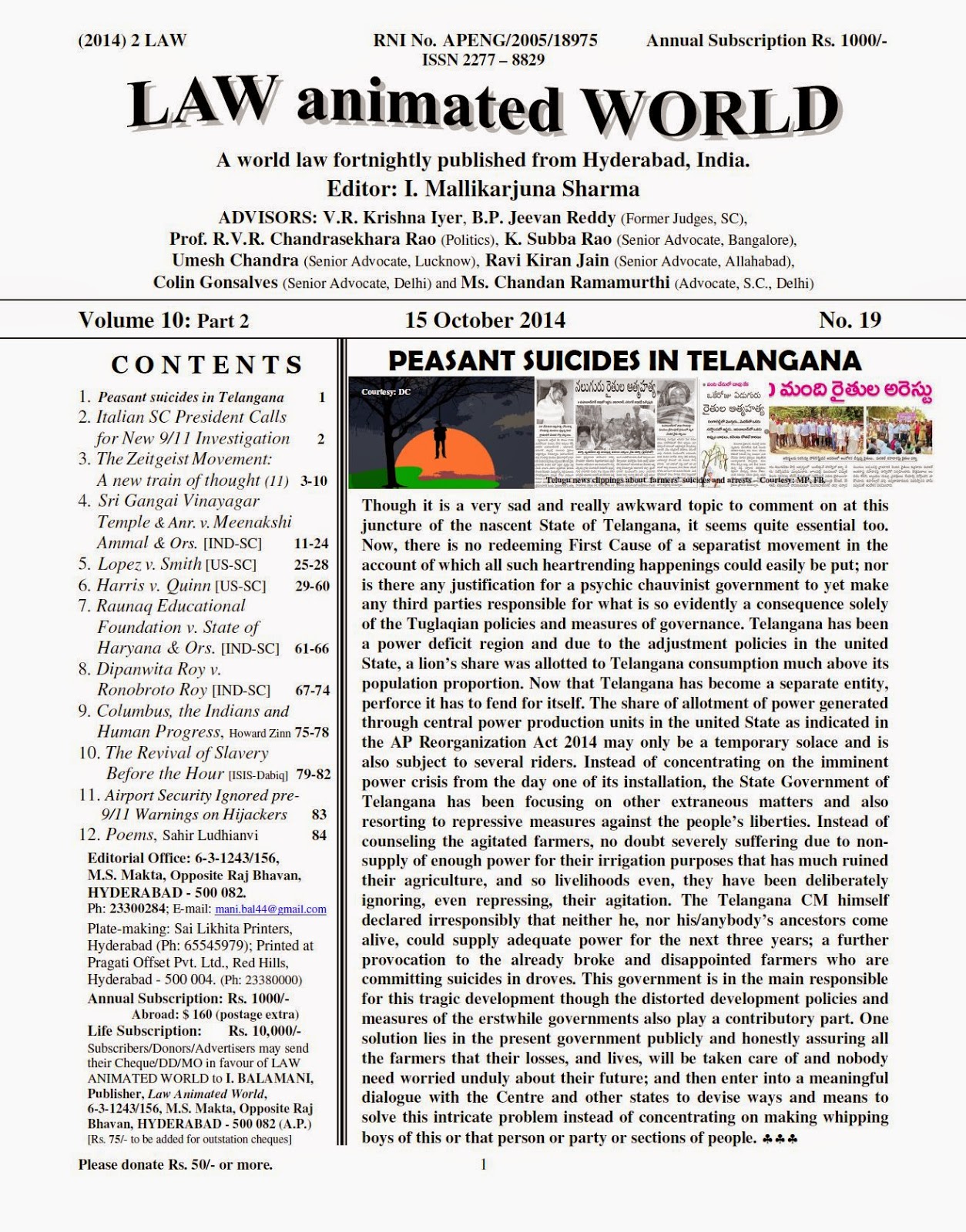 Though it is a very sad and really awkward topic to comment on at this juncture of the nascent State of , it seems quite essential too. Now, there is no redeeming First Cause of a separatist movement in the account of which all such heartrending happenings could easily be put; nor is there any justification for a psychic chauvinist government to yet make any third parties responsible for what is so evidently a consequence solely of the Tuglaqian policies and measures of governance. Telangana has been a power deficit region and due to the adjustment policies in the united State, a lion’s share was allotted to Telangana consumption much above its population proportion. Now that Telangana has become a separate entity, perforce it has to fend for itself. The share of allotment of power generated through central power production units in the united State as indicated in the AP Reorganization Act 2014 may only be a temporary solace and is also subject to several riders. Instead of concentrating on the imminent power crisis from the day one of its installation, the State Government of Telangana has been focusing on other extraneous matters and also resorting to repressive measures against the people’s liberties. Instead of counseling the agitated farmers, no doubt severely suffering due to non-supply of enough power for their irrigation purposes that has much ruined their agriculture, and so livelihoods even, they have been deliberately ignoring, even repressing, their agitation. The Telangana CM himself declared irresponsibly that neither he, nor his/anybody’s ancestors come alive, could supply adequate power for the next three years; a further provocation to the already broke and disappointed farmers who are committing suicides in droves. This government is in the main responsible for this tragic development though the distorted development policies and measures of the erstwhile governments also play a contributory part. One solution lies in the present government publicly and honestly assuring all the farmers that their losses, and lives, will be taken care of and nobody need worried unduly about their future; and then enter into a meaningful dialogue with the Centre and other states to devise ways and means to solve this intricate problem instead of concentrating on making whipping boys of this or that person or party or sections of people. §§§
Posted by I.M.Sharma at 9:03 PM No comments: Links to this post 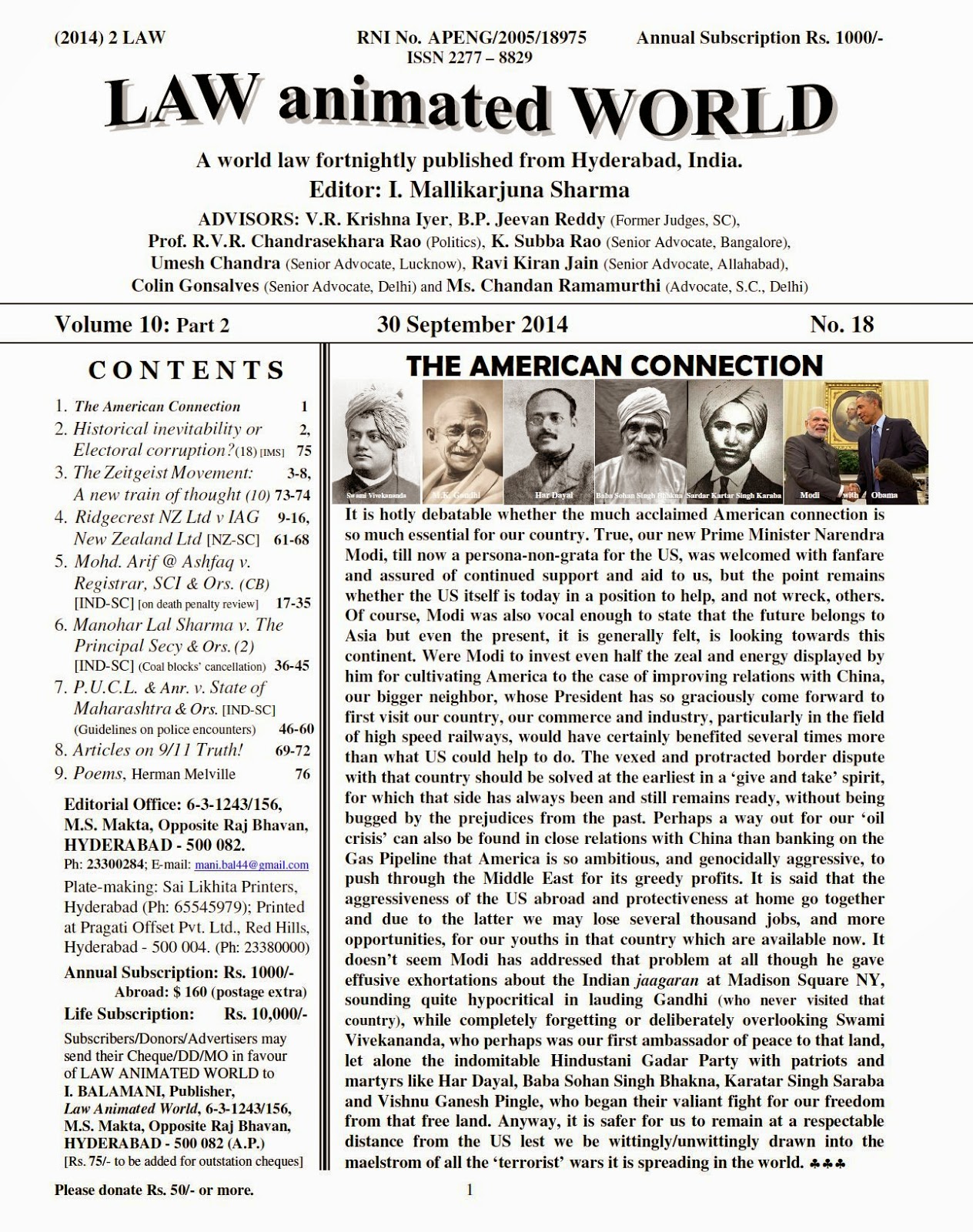 It is hotly debatable whether the much acclaimed American connection is so much essential for our country. True, our new Prime Minister Narendra Modi, till now a persona-non-grata for the US, was welcomed with fanfare and assured of continued support and aid to us, but the point remains whether the US itself is today in a position to help, and not wreck, others. Of course, Modi was also vocal enough to state that the future belongs to but even the present, it is generally felt, is looking towards this continent. Were Modi to invest even half the zeal and energy displayed by him for cultivating America to the case of improving relations with China, our bigger neighbor, whose President has so graciously come forward to first visit our country, our commerce and industry, particularly in the field of high speed railways, would have certainly benefited several times more than what US could help to do. The vexed and protracted border dispute with that country should be solved at the earliest in a ‘give and take’ spirit, for which that side has always been and still remains ready, without being bugged by the prejudices from the past. Perhaps a way out for our ‘oil crisis’ can also be found in close relations with China than banking on the Gas Pipeline that America is so ambitious, and genocidally aggressive, to push through the Middle East for its greedy profits. It is said that the aggressiveness of the US abroad and protectiveness at home go together and due to the latter we may lose several thousand jobs, and more opportunities, for our youths in that country which are available now. It doesn’t seem Modi has addressed that problem at all though he gave effusive exhortations about the Indian jaagaran at Madison Square NY, sounding quite hypocritical in lauding Gandhi (who never visited that country), while completely forgetting or deliberately overlooking Swami Vivekananda, who perhaps was our first ambassador of peace to that land, let alone the indomitable Hindustani Gadar Party with patriots and martyrs like Har Dayal, Baba Sohan Singh Bhakna, Karatar Singh Saraba and Vishnu Ganesh Pingle, who began their valiant fight for our freedom from that free land. Anyway, it is safer for us to remain at a respectable distance from the lest we be wittingly/unwittingly drawn into the maelstrom of all the ‘terrorist’ wars it is spreading in the world. §§§
Posted by I.M.Sharma at 10:46 AM No comments: Links to this post