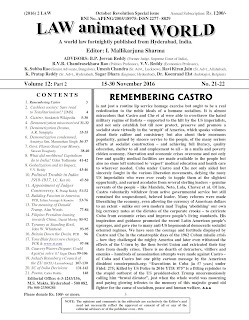 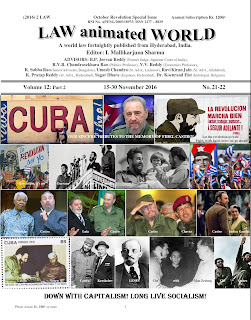 is not just a routine lip service homage exercise but ought to be a real rededication to the noble ideals of a humane socialism. It is almost miraculous that Castro and Che et al were able to overthrow the hated military regime of Batista – supported to the hilt by the US imperialists, and not only establish but till now protect, preserve and promote a socialist state virtually in the ‘armpit’ of America, which speaks volumes about their caliber and consistency but also about their enormous popularity, gained by sincere service to the people, of the many serious efforts at socialist construction – and achieving full literacy, quality education, shelter to all and employment to all – in a mafia and poverty ridden economy. Starvation and economic crises overcome and not only free and quality medical facilities are made available to the people but also no stone left unturned to ‘export’ medical education and health care to wherever needed. Cuba under Castro and Che not only aided but sincerely fought in the various liberation movements, defying the nasty US imperialists who were ever ready to topple them at the slightest opportunity, and earned accolades from several sterling leaders – genuine servants of the people – like Mandela, Neto, Lula, Chavez et al. Of late, Castro voluntarily withdrew from active governmental service but still remained the unquestioned, beloved leader. Many reforms were made liberalizing the economy, even allowing the currency of American dollars to an extent - unlike our own modern mad Tuglaq ‘abolishing’ our own big currency notes at the dictates of the corporate crooks – to extricate Cuba from economic crises and improve people’s living standards. His inspiration and guidance promoted the recent Latin American people’s upsurges, and gave rise to many anti-US hegemonical democratic socialist oriented regimes. We have seen the courage and fortitude displayed by Castro and Che in the catastrophic days of the 1962 Cuban missile crisis – how they challenged the mighty America and later even withstood the effects of the U-turn by the then Soviet Union and extricated their tiny state from deadly crises. There is no dearth of detractors, vilifiers and enemies – hundreds of assassination attempts were made against Castro – of Cuba and Castro but one pithy cartoon message by the American dissident counterpunch.org: “Executions in Cuba [in 57 years] under Fidel: 275; Killed by US Police in 2016 YTD: 875” is a fitting rejoinder to the stupid outburst of the US president-elect Trump unceremoniously calling him “brutal dictator”, just when the whole world was mourning and paying glowing tributes to the memory of this majestic grand old fighter for the cause of socialism, peace and human welfare. §§§
Posted by I.M.Sharma at 9:01 PM No comments:

CAN BRICS PROVIDE AN ALTERNATIVE? 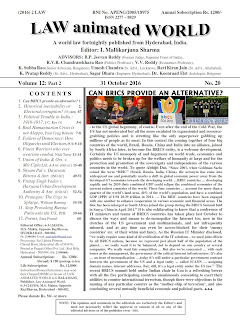 - to the US global hegemony, of course. Even after the end of the Cold War, the US has not moderated but all the more escalated its expansionist and resource-grabbing policies and is strutting like the only superpower gobbling up millions of people as its meat. In this context the coming together of four big countries of the world, Brazil, Russia, China and India into an alliance, joined by South Africa later, to become the BRICS entity, is a welcome development. Certainly the US monopoly of and hegemony on world trade, economics and politics needs to be broken up for the welfare of humanity at large and for the protection and promotion of the sovereignty and independence of the various countries in the world. To quote Abhijit Das, “Since 2001, when Goldman Sachs coined the term “BRIC” (Brazil, Russia, India, China), the acronym has come into widespread use and potentially marks a shift in global economic power away from the developed G7 economies towards the developing world. …BRIC countries … developing rapidly and by 2050 their combined GDP could eclipse the combined economies of the current richest countries of the world. These four countries … account for more than a quarter of the world’s land area, 40% of the world’s population, and have a combined GDP (PPP) of US$ 20.39 trillion in 2011. … The BRIC countries have been engaged with one another to enhance cooperation in various economic and financial areas. The bloc has been enlarged as South Africa joined the group during the BRICS Summit held in Sanya, China in April 2011.” It is also exhilarating to know that a conference of IT ministers and teams of BRICS countries has taken place last October to discuss the ways and means to de-monopolize the Internet too, now in the clutches of the US government and multinationals, and not infrequently misused, and at any time can even be access-blocked for their ‘enemy countries’ etc. at their whim and fancy. As the Russian IT Minister disclosed, “we really require some kind of diversification of the IT solutions – we need joint efforts by all BRICS nations, because we represent just about half of the population of the planet…. we really want it to be balanced, not to depend on one country or several companies. We really want fair competition … But also we’re concerned … with such issues as the management, the governance of the critical internet infrastructure. It’s also … an issue of monopolization. …today it’s still under a particular government contract between the government of the US and a legal entity ... called ICANN … assigning domain names, internet addresses. But, still, it’s a legal entity under the US law.” The recent BRICS summit held under Indian chair in Goa is a refreshing breeze with all the five participating countries unanimously consenting to exert their abilities to counter international terrorism, though there were objections to the naming of any particular country as the ‘mother-ship of terrorism’, and also concluding several mutually beneficial economic and political pacts. §§§
Posted by I.M.Sharma at 8:49 PM No comments: 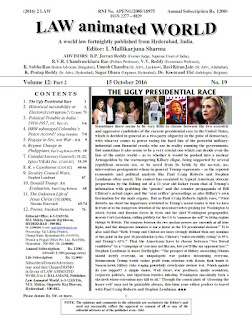 Sometimes there seems to be very little to choose between the two eccentric and aggressive candidates of the current presidential race in the United States, which is derided in general as a two-party oligarchy in the guise of democracy, with whoever comes to power toeing the hard line of the powerful military-industrial cum financial crooks who are in reality running the governments. But sometimes it also seems to be a very crucial one which can decide even the fate of the entire world – as to whether it would be pushed into a nuclear Armageddon by the warmongering Killary clique, being supported by several republican neocons too, or be saved from its brink by the no-war, no-intervention protagonists whom in general Trump represents – as the reputed economists and political analysts like Paul Craig Roberts and Stephen Lendman often assert. The contest has escalated to typical American obscene proportions by the fishing out of a 11 year old locker room chat of Trump’s infatuation with grabbing the ‘pussies’ and the counter propaganda of Bill Clinton’s actual rapes and the ‘oral orifice’ proceedings as also Hillary’s own fascination for the male organs.  But as Paul Craig Roberts rightly rues, “What disturbs me about the importance attributed to Trump’s sexual banter is that we have in front of us the dangerous situation of the neoconservatives pushing for Washington to attack Syrian and Russian forces in Syria and the chief Washington propagandist, neocon Carl Gershman, calling publicly for the US to “summon the will” to bring regime change to Russia. The tensions between the two nuclear powers are currently at all time highs, and this dangerous situation is not a factor in the US presidential election!” It is also said that “Both Trump and Clinton are more strongly disliked than any nominee at this point in the past 10 presidential cycles. Clinton’s “unfavourability rating” is 55% and Trump’s 65%.” That the Americans have to choose between “two flawed candidates” in a “campaign of ‘you may not like me, but you’ll like my opponent less’.” Stephen Lendman is more forthright: “The prospect of Hillary succeeding Obama should terrify everyone, an unapologetic war goddess threatening everyone. Businessman Trump would rather profit from relations with Russia than bomb it. Neocon hawk Hillary risks waging potentially cataclysmic nuclear war. Which agenda do you support? A simple choice. Wall Street, war profiteers, media scoundrels, corporate pollsters, and bipartisan lunatics infesting Washington one-sidedly back a she-devil whose extremism may kill us all.” Though the constraints of ‘choosing the lesser evil’ may not be palatable always, this time your editor prefers to travel with Paul Craig Roberts and Stephen Lendman. §§§
Posted by I.M.Sharma at 8:33 PM No comments: