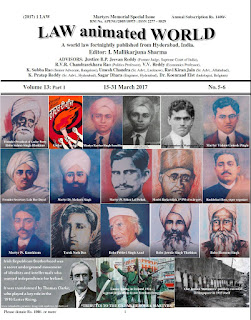 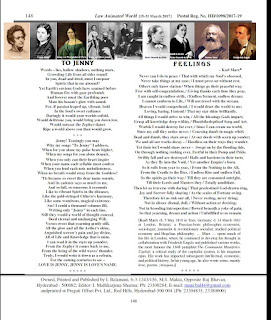 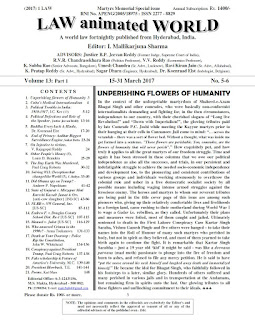 In the context of the unforgettable martyrdom of Shaheed-e-Azam Bhagat Singh and other comrades, who were basically non-conformist internationalists demanding and fighting for, in the then circumstances, independence to our country, with their cherished slogans of “Long live Revolution!” and “Down with Imperialism!”, the glowing tributes paid by late Comrade P.C. Joshi while meeting the Kayyur martyrs prior to their hanging at their cells in Cannanore Jail come to mind: “… across the verandah – there was a sort of flower bed. Without a thought, what was inside me got formed into a sentence. "Those flowers are perishable. You, comrades, are the flowers of humanity that will never perish".” How exquisitely put, and how truly it applies to all the great martyrs of our freedom struggle. Time and again it has been stressed in these columns that we owe our political independence as also all the successes, and trials, in our persistent and indefatigable struggle to achieve the needed socio-economic independence and development too, to the pioneering and consistent contributions of various groups and individuals working strenuously to overthrow the colonial rule and usher in a free democratic socialist society by all possible means including waging intense armed struggles against the ferocious enemy. The heroes and martyrs to whom our reverent tributes are being paid in the title cover page of this issue are among such pioneers who, giving up their relatively comfortable lives and livelihoods in a foreign land, came rushing to their motherland during World War I to wage a Gadar i.e. rebellion, as they called. Unfortunately their plans and measures were foiled, most of them caught and jailed. Ultimately sentenced to death in the First Lahore Conspiracy Case Kartar Singh Saraba, Vishnu Ganesh Pingle and five others were hanged – to take their names into the Roll of Honour of many such martyrs who perished in body, but not in spirit as they believed, and most of them yearned to take birth again to continue the fight. It is remarkable that Kartar Singh Sarabha – just a 19 year old ‘kid’ it might be said - was like a deewana parwana (mad moth) passionate to plunge into the fire of freedom and burn to ashes, and refused to file any mercy petition. He is said to have “put the noose around his neck himself and laughed away death and immortalized himself.” He became the idol for Bhagat Singh, who faithfully followed in his footsteps to a later, similar glory. Hundreds of others suffered and many perished in various jails and in transportation at the Andamans, but remaining firm in spirits unto the last. Our glowing tributes to all these fighters and unflinching commitment to their ideals. §§§
Posted by I.M.Sharma at 10:23 PM No comments: Links to this post

RACISM ON THE HIGH IN THE NOW? 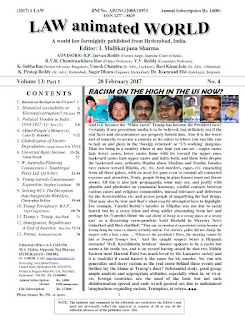 And is it because the ‘White racist’ Trump has become the President now? Certainly if our presstitute media is to be believed, but definitely not if the real facts and circumstances are properly looked into. Also it is the worst sort of temerity to accuse a country or its rulers to where you run like rats to hail on and glory in the ‘foreign returned’ or ‘US working’ insignias. That too being in a country where at any time you can see – upper castes hate lower castes, lower castes fume with ire toward the upper ones, backward castes hate upper castes and dalits both, and these both despise the backward ones, orthodox Hindus abuse Muslims and Muslim fanatics rave rancor toward Hindus, etc. etc. And murders, rapes, etc. emanating from all these galore, with no need for guns even to commit all connected excesses and atrocities. Truly, people living in glass houses must not throw stones. All this is also hate propaganda, some may say, and justify with plaudits and platitudes on communal harmony, cordial contacts between various castes and religious communities, mutual tolerance and deference for the downtrodden, etc. and accuse people of magnifying the bad things. That may also be true and that’s what exactly attempted here to highlight. For example, Vamshi Reddy’s murder in Milpitas was not due to racial hatred but by a crazy felon and drug addict absconding from law and perhaps he (Vamshi) fitted ‘the sad cliché of being in a wrong place at a wrong time’ as a discerning correspondent Scott Herhold in Mercury News remarked and then clarified: “That one [accusation of exacerbated racism because of Trump being the cause] is almost certainly untrue. For starters, police did not charge the suspect with a hate crime. … Whatever the president’s flaws, the shooting cannot be laid at Donald Trump’s feet.” And the caught suspect bears a Hispanic surname! Well, Kuchibhotla Srinivas’ shooter appears to be a racist but seems a bit senile too, and is on record having stated he shot two Middle Eastern men! Harnish Patel was much loved by the society and it is doubtful if racial hatred is the cause for his murder. So, can one generalize and decry racism as the real cause behind these events and further lay the blame at Trump’s door? Substantial study, good grasp, ample analysis and appropriate attitudes, especially when in, or vis-à-vis, foreign countries, are the need of the hour but not such disinformation spread and rude wrath poured out due to unbalanced imaginations regarding racism, Trumpism, et cetera. §§§
Posted by I.M.Sharma at 10:09 PM No comments: Links to this post 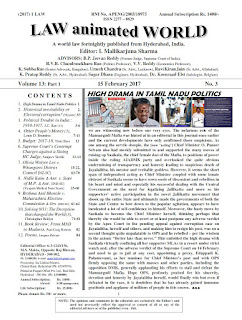 we are witnessing now before our very eyes. The nefarious role of the Mannargudi Mafia was hinted at in an editorial in this journal once earlier and the current developments have only confirmed those suspicions. As one among the servile sheeple, the [now ‘acting’] Chief Minister O. Paneer Selvam also had meekly submitted to and supported the many moves of raising up Sasikala, the chief female don of the Mafia, to positions of power inside the ruling AIADMK party and overlooked the quite obvious undermining of transparency and honesty leading to suspicious death of Jayalalitha, his mentor and veritable goddess. However, it seems the short span of independent acting as Chief Minister coupled with some innate distrust of Sasikala seems to have sown seeds of discontent and rebellion in his heart and mind and especially his successful dealing with the Central Government on the need for legalizing Jallikattu and more so his supporters’ active participation in the novel Jallikattu movement that shook up the entire State and ultimately made the governments of both the State and Centre to bow down to the popular agitation, appears to have inculcated a lot of self-confidence in himself. Moreover, the hasty move by Sasikala to become the Chief Minister herself, thinking perhaps that thereby she would be able to avert or at least postpone any adverse verdict by the Apex Court in the pending appeal against corruption case on Jayalalitha, herself and others, and making him to resign his post, was on a second thought quite unpalatable to OPS and he rebelled – per the wisdom in the axiom: “Better late than never.” This unfolded the high drama with Sasikala virtually confining all her supporter MLAs in a resort under strict watch and, after the adverse verdict of the Supreme Court on 14 February and need to go to jail at any cost, appointing a proxy, Edappadi K. Palaniswami, as her nominee for Chief Minister’s post and with OPS firmly opposing the same with masses and other parties, including the opposition DMK, generally applauding his efforts to stall and defeat the Mannargudi Mafia. Hope OPS, profusely praised for his sincerity, devotion and honesty by Jayalalitha herself, would finally win but even if defeated in the race, it is doubtless that he has already gained immense gratitude and applause of millions of people in this course.  §§§
Posted by I.M.Sharma at 9:38 PM No comments: Links to this post