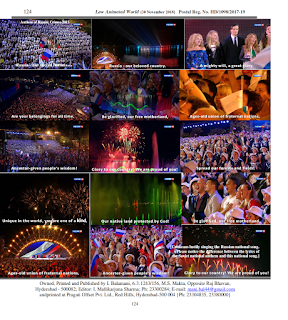 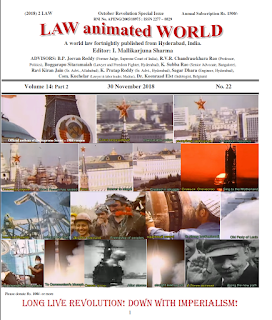 IS THERE ANY FUTURE FOR SOCIALISM?
While commemorating the glorious October Socialist Revolution and the rich legacy of its stupendous achievements as also decrying the many tragic and avoidable excesses occurring in its wake, one is constrained to put the above question – to self as also to all humane and socially conscious persons – and seek the right answers. Extreme critics, not just from vested bourgeois circles, castigate the communist or state socialist experiments made in the wake of October Revolution and treat them as veritable nightmares which only left a trail of inhuman atrocities and economic chaos. These faultfinders gloat on the developments leading to the collapse of the Soviet socialist systems in the world and adoption of market capitalist economy by even the few existing state socialist countries. But, surprisingly, there are several other scholars, even from conservative circles, once again ruminating on the relatively stable past, even with a cold war raging between the two superpowers – America and Soviet Union –, and the contributions made by State Socialisms to the cause of world peace and security. They even desire and appeal for a sort of rich blend of the ‘good’s in the rival systems and forging of a multi-polar, democratic, socially beneficial world economy and polities. Not denying the horrible distortions that occurred in the construction and development of state socialisms all over the world, this editor feels their enormous positive features cannot be ignored; especially their pioneering role in declaring and securing almost all the basic fundamental rights for people now being urged by all socially concerned organizations and political parties all over the world, save of course a few fanatical sectional parties and interests, like the right to vote to all, rights of women and trans-genders, free education, free public health, assured shelter, speedy industrialization in public sector, etc. It is mainly the happening and development of the Soviet and later Chinese, Cuban, Vietnamese etc. socialist experiments and their successes that led to the success of national liberation movements all over the world with a strong bulwark of the socialist camp protecting and promoting their interests. Even now as Saral Sarkar says in his detailed, analytical article published in this issue, a sort of eco-socialism is a worthy ideal to be sought and fought for; and thoughtful scholars, hailing from several countries and communities of the world, do cherish and propagate a like ideal. Even in our country, despite the rapid strides being made in and through the market capitalist economy with its inevitable evils affecting the people, we still boast of a constitutionally declared and assured secular, socialist democracy, and there is no doubt that only a sort of humane, democratic, eco-friendly socialism can save the world.  §§§
Posted by I.M.Sharma at 10:37 AM No comments: