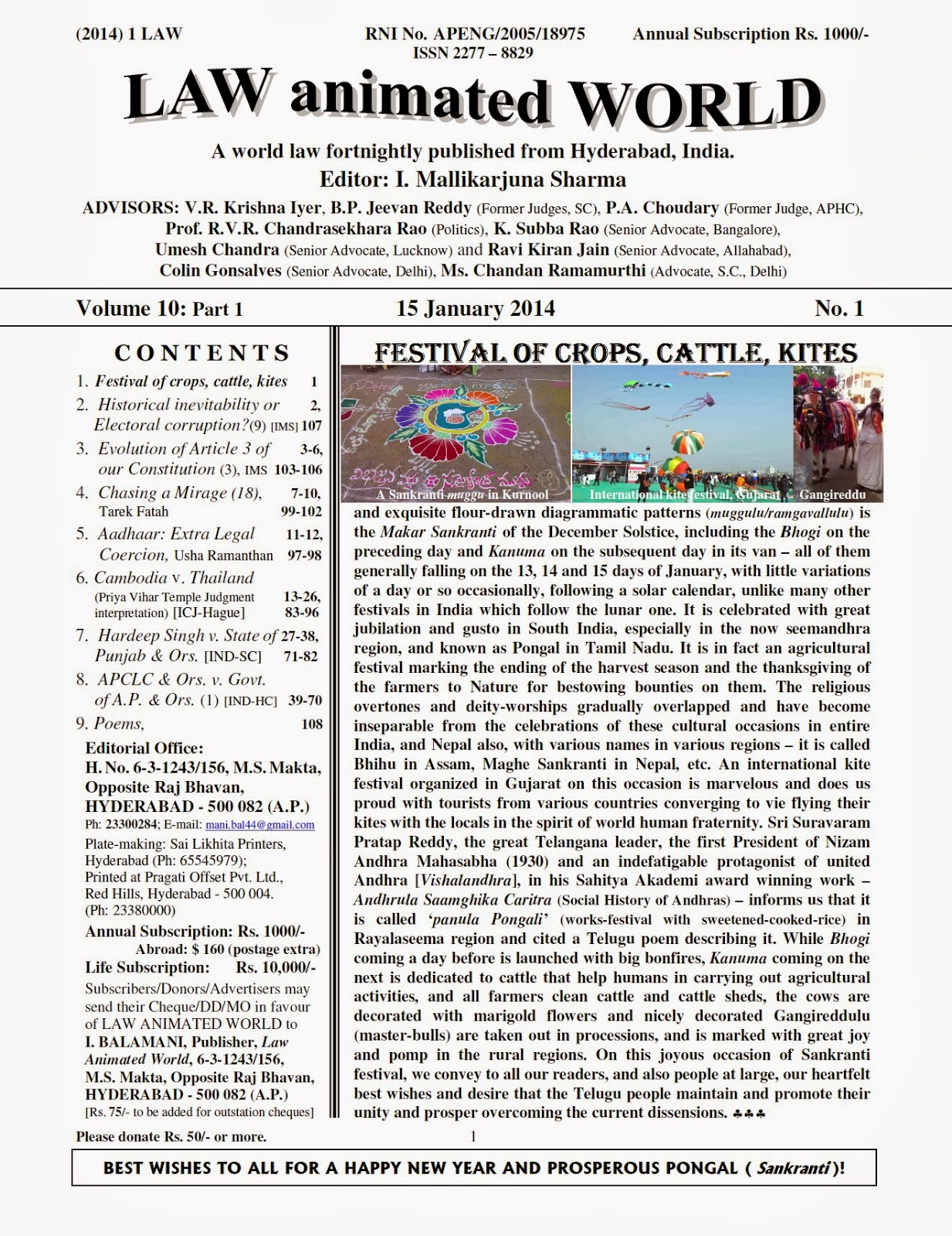 Posted by I.M.Sharma at 10:43 PM No comments: Links to this post

and exquisite flour-drawn diagrammatic patterns (muggulu/ ramgavallulu) is the Makar Sankranti of the December Solstice, including the Bhogi on the preceding day and Kanuma on the subsequent day in its van – all of them generally falling on the 13, 14 and 15 days of January, with little variations of a day or so occasionally, following a solar calendar, unlike many other festivals in India which follow the lunar one. It is celebrated with great jubilation and gusto in , especially in the now seemandhra region, and known as Pongal in Tamil Nadu. It is in fact an agricultural festival marking the ending of the harvest season and the thanksgiving of the farmers to Nature for bestowing bounties on them. The religious overtones and deity-worships gradually overlapped and have become inseparable from the celebrations of these cultural occasions in entire , and also, with various names in various regions – it is called Bhihu in , Maghe Sankranti in , etc. An international kite festival organized in on this occasion is marvelous and does us proud with tourists from various countries converging to vie flying their kites with the locals in the spirit of world human fraternity. Sri Suravaram Pratap Reddy, the great Telangana leader, the first President of Nizam Andhra Mahasabha (1930) and an indefatigable protagonist of united Andhra [Vishalandhra], in his Sahitya Akademi award winning work – Andhrula Saamghika Caritra (Social History of Andhras) – informs us that it is called ‘panula Pongali’ (works-festival with sweetened-cooked-rice) in Rayalaseema region and cited a Telugu poem describing it. While Bhogi coming a day before is launched with big bonfires, Kanuma coming on the next is dedicated to cattle that help humans in carrying out agricultural activities, and all farmers clean cattle and cattle sheds, the cows are decorated with marigold flowers and nicely decorated Gangireddulu (master-bulls) are taken out in processions, and is marked with great joy and pomp in the rural regions. On this joyous occasion of Sankranti festival, we convey to all our readers, and also people at large, our heartfelt best wishes and desire that the Telugu people maintain and promote their unity and prosper overcoming the current dissensions. §§§
Posted by I.M.Sharma at 10:39 PM No comments: Links to this post