HUE AND CRY AGAINST ALMOST NOTHING 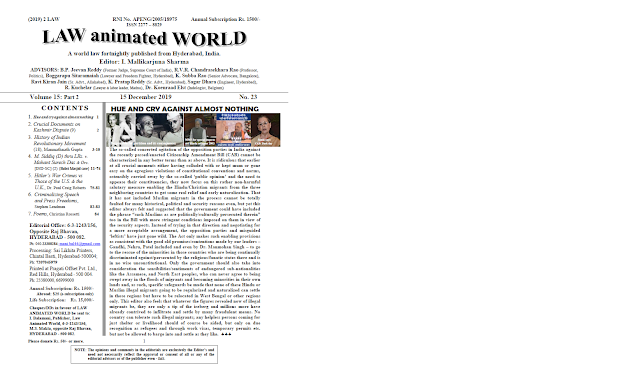 The so-called concerted agitation of the opposition parties in India against the recently passed/enacted Citizenship Amendment Bill (CAB) cannot be characterized in any better terms than as above. It is ridiculous that earlier at all crucial moments either having colluded with or kept mum or gone easy on the egregious violations of constitutional conventions and norms, ostensibly carried away by the so-called ‘public opinion’ and the need to appease their constituencies, they now focus on this rather non-harmful salutary measure enabling the Hindu/Christian migrants from the three neighboring countries to get some real relief and early naturalization. That it has not included Muslim migrants in the process cannot be totally faulted for many historical, political and security reasons even, but yet this editor always felt and suggested that the government could have included the phrase “such Muslims as are politically/culturally persecuted therein” too in the Bill with more stringent conditions imposed on them in view of the security aspects. Instead of trying in that direction and negotiating for a more acceptable arrangement, the opposition parties and misguided ‘leftists’ have just gone wild. The Act only makes such enabling provisions as consistent with the good old promises/contentions made by our leaders – Gandhi, Nehru, Patel included and even by Dr. Manmohan Singh – to go to the rescue of the minorities in those countries who are being continually discriminated against/persecuted by the religious/fanatic states there and is in no wise unconstitutional. Only the government should also take into consideration the sensibilities/sentiments of endangered sub-nationalities like the Assamese, and North East peoples, who can never agree to being swept away in the floods of migrants and becoming minorities in their own lands and, as such, specific safeguards be made that none of these Hindu or Muslim illegal migrants going to be regularized and naturalized can settle in those regions but have to be relocated in West Bengal or other regions only. This editor also feels that whatever the figures revealed now of illegal migrants be, they are only a tip of the iceberg and millions more have already contrived to infiltrate and settle by many fraudulent means. No country can tolerate such illegal migrants; any helpless persons coming for just shelter or livelihood should of course be aided, but only on due recognition as refugees and through work visas, temporary permits etc. but not be allowed to barge into and settle as they like.  §§§
Posted by I.M.Sharma at 1:18 PM No comments: 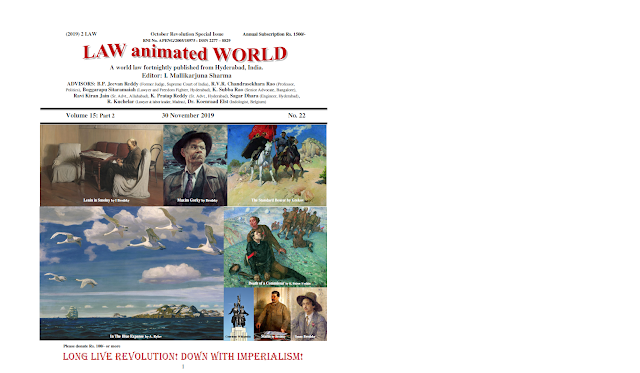 The latter is nowadays depicted as an undesirable, even impossible, ideal by most of the free capitalism protagonist economists and politicians of the day, who preponderate in the world, post the collapse of the Soviet Union and fall of socialist systems in general – mainly due to their own inherent defects and unpopularity due to the Big Brother regimes and suppression of human rights in that name. However, as Dr. Paul Craig Roberts had made it clear in his “Failure of Laissez Faire Capitalism”, and as more and more people-friendly economists all over the world are recognizing, it is not State Socialism alone which is capable of such misrule, but more so, the profit greedy corporate capitalism, vastly growing unbriddled in this age of so-called globalism, which is prone to as also demonstrated its oppressions and genocidal atrocities against the peoples and only benefited the 1% super-rich at the cost of the deprived 90% all over the world. In this context it is exhilarating to find that as per the Sustainable Development Index (SDI) designed by anthropologist Dr Jason Hickel, which in a way properly upgrades the Human Development Index developed by the Pakistani economist Mahbub-ul-Haq that is being used by the United Nations Development Program since 1990 too, is now the highest in Cuba, one of the last bastions of Socialism, which has survived all the threats, sanctions and aggressive attacks by the world’s most formidable imperialist power till date, and blended its state socialism with humanist democracy and even free markets to an extent; this SDI “calculates its results by dividing a nation's "human development" score, obtained by looking at statistics on life expectancy, health and education, by its "ecological overshoot," the extent to which the per capita carbon footprint exceeds Earth's natural limits.” So often the supposedly freedom and democracy oriented capitalist imperialist West portrays its developed economies as glaring examples of success of capitalism cleverly hiding not only their miserable human rights records all over the world but, more important, the enormous ecological costs they imposed on the nature and environment and the peoples of the world in general. It is a truism that if environmental costs are reckoned the capitalist corporations can never prosper in the front ranks and if public costs i.e. the stupendous public finances they plunder are taken into account, one only wonders why not organized intelligent communities of people themselves take over the reins instead of leaving it to these crooked devotees of Moloch and Mammon. Well, that is exactly what is meant by the ideal of sustainable development oriented humanist democratic socialism, which is the only option to save us from the dangers of an armageddon and an ecological disaster resulting in total ruin of our species altogether. §§§
Posted by I.M.Sharma at 12:56 PM No comments: