MILITARY RUSH TO BREAK UP

our beloved state of Andhra Pradesh – a clear case of misuse of security forces machinery, meant for securing the borders but not for rending the people – was exhibited by sending the ‘Andhra Pradesh Reorganization Bill’ by a special BSF aircraft. Truly, “It indicates that either the Centre is in a tearing hurry or does not trust the State machinery.” This gave rise to incensed comments from the opposition leaders with CBN of TDP shouting: “What is the need to send the bill copies in a special Border Security Force aircraft? Is waging a war against Andhra Pradesh? What are they thinking about us?” and other TDP leaders openly accusing that moneybags were also brought in the same aircraft clandestinely for secret distribution to buy the support of wavering seemandhra MLAs to the bill and each such MLA was offered 10-15 crores of rupees for the purpose. We are also alarmed at such misuses of the security forces machinery for ulterior purposes and for the luxurious voyages of the so-called VIP politicians, pervert bureaucrats and other undesirable elements. Only some weeks back a terrorist suspect was specially flown in by a BSF aircraft another clear case of misuse of public funds. The recent misuse is more loathsome and also indicative of high corruption in the topmost political circles in the country. We feel this is a fit case for our High Court to initiate suo motu proceedings against the involved personnel, officers and also politicians like Digvijay Singh, who is also accused of misusing official machinery in his recent tour to ‘persuade and convince’ his party leaders and MLAs regarding this abominable partition process, especially because of the extraordinary nature of the steps taken and the serious corruption allegations by some legislators of the opposition party. It may also be pointed out that all this ‘tearing hurry’ is for ‘wreaking vengeance’ on the people of Seemandhra who rose in millions against this hated bifurcation proposal and in that process burnt the effigies of Sonia, Rahul, et al, even destroyed the statues of Rajiv and Indira, and dug a grave for Sonia even, but Telugu people will never condone such vengeful injustices but bury still deeper all such reactionary forces and somehow save their unity and integrity against all these heavy odds. §§§
Posted by I.M.Sharma at 12:47 AM No comments: Links to this post 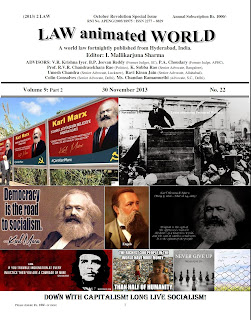 FEDERALISM IS THE DESIDERATUM

Perhaps India is the only country in the world with scores of diverse communities belonging to various religious, linguistic etc. denominations coexisting in one ‘unity in diversity’ since thousands of years but it was never politically united except for some brief interregnums; the unity was mainly cultural and emotional – of belonging to a civilization that grew up from the Indus river valley. Yet it is perhaps the only such country in the world where the federal structure is quite shoddy and a unitary command structure is sought to be imposed by the post-independence ruling coteries from time to time. A Constitution which was meant to be really federal with residual powers to the provinces per the Aims and Objects Resolution of Jawaharlal Nehru was diluted and almost modified into a unitary covenant with all substantial powers including residual powers to the centre and, what is more despicable, undermining provinical autonomy to the extent of endowing Parliament with powers to cut up the States as it likes. Article 3 of the Constitution, which the Constitutional Adviser had drafted in a manner as to make the previous consent of the province an essential prerequisite for dividing it up, was totally distorted, so as to only call for the views of the State Assembly ascertained by the President in this regard. However, an explanation was given that the process for any such reorganization would have to be initiated by the State Assembly alone and both for initiation of the proposal and for the specific provisions in the bill to create a new state, the affected State Assembly has to act i.e. obviously pass favorable resolutions. Then, a constitutional amendment in 1955 sought to negate the impact of such explanation too. But, fortunately, the actual practice in such circumstances in our country has been more cautious and mindful of states’ autonomy; there has not been a single occasion – save in case of Punjab and Haryana which exception only proves the rule – when any new State was created, actually any bill for the same was drafted, without first the affected State Assembly passing a resolution in that favour. This healthy constitutional convention cannot be given a go-by under any circumstances and so the Telugu people will be fully justified in demanding that any bill for ‘reorganization of Andhra Pradesh’ be immediately sent back by the President of India for lack of a prior resolution of the State Assembly favoring that course, and also that Article 3 has to be suitably amended to accord the States ample powers to protect their autonomy and identity in such circumstances. That means the Telugu people are duty bound to fight to the end for the flowering of federalism, a main desideratum, in our polity. §§§
Posted by I.M.Sharma at 12:40 AM No comments: Links to this post