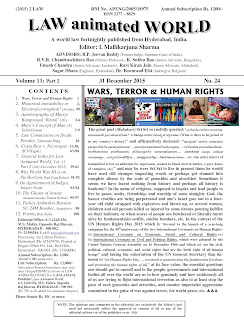 eamunnadi garvakaaraNam? ఏ దేశచరిత్ర చూచినా ఏమున్నది గర్వకారణం? (What is there to be proud of in any country’s history?’ and affirmatively declared: “narajaati caritra samastam parapeeDaNa paraayanatvam, …parasparaapaharaNoadyoagam, …raNarakta pravaahasiktam,
beebhatsarasa pradhaanam, piSaacagaNa samavaakaaram…, నరజాతిచరిత్ర సమస్తం పరపీడన పరాయణత్వం… పరస్పరాపహరణోద్యోగం … రణరక్తప్రవాహసిక్తం… పిశాచగణసమవాకారం… etc. (the entire history of humankind is but an addiction for oppression, soaked in blood shed in battles, a gory dance of vampires, etc.)” and may be were Sri Sri to live in present times he would have used still stronger impacting words or perhaps got stunned into complete silence by the scale of genocides and atrocities! Sometimes it seems we have learnt nothing from history and perhaps all history is bunkum!? In the name of religions, supposed to inspire and lead people to live in peace, amity, friendship, and worship of some almighty God, the basest cruelties are being perpetrated and one’s heart goes out to a four-year old child strapped with explosives and blown up, or several women, children and old persons killed or injured by some drones pouring hellfire on their habitats; or when scores of people are butchered or literally burnt alive by fundamentalist outfits, suicide bombers, etc. In the context of the UN Human Rights Day 2015 which is “devoted to the launch of a year-long campaign for the 50thanniversary of the two International Covenants on Human Rights: the International Covenant on Economic, Social and Cultural Rights and the International Covenant on Civil and Political Rights, which were adopted by the United Nations General Assembly on 16 December 1966 and which set out the civil, political, cultural, economic, and social rights that are the birth right of all human beings” and taking the exhortation of the UN General Secretary Ban Ki-moon to “on Human Rights Day, … recommit to guaranteeing the fundamental freedoms and protecting the human rights of all,” at its face value, the essential questions one should put to oneself and to the people, governments and international bodies all over the world are as to how genuinely and how assiduously all of us are trying to fight international terrorism as also to at least stop the pace of such genocides and atrocities, and counter imperialist aggressions committed in the guise of war against terror, for world peace, etc. §§§
Posted by I.M.Sharma at 1:03 AM No comments: Links to this post