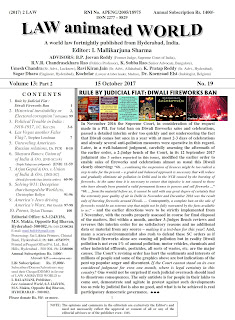 In November 2016 the Supreme Court, in consideration of the request made in a PIL for total ban on Diwali fireworks sales and celebrations, passed a detailed interim order too quickly and not underscoring the fact that Diwali comes but once in a year with at most 2-3 days of celebrations and already several anti-pollution measures were operative in this regard. Later, in a well-balanced judgment, carefully assessing the aftermath of the earlier order, a 2-Judge bench of the Court, in its 12 September 2017 judgment (the 3 orders reported in this issue), modified the earlier order to enable sales of fireworks and celebrations almost as usual this Diwali  clearly observing: “68. …continuing the suspension of licences might be too radical a step to take for the present – a graded and balanced approach is necessary that will reduce and gradually eliminate air pollution in and in the NCR caused by the bursting of fireworks. At the same time it is necessary to ensure that injustice is not caused to those who have already been granted a valid permanent license to possess and sell fireworks ...” “69. …from the material before us, it cannot be said with any great degree of certainty that the extremely poor quality of air in in November and December 2016 was the result only of bursting fireworks around Diwali. … Consequently, a complete ban on the sale of fireworks would be an extreme step that might not be fully warranted by the facts available to us.” – and the earlier directions were to be strictly implemented from 1 November, with the results properly assessed in course for final disposal of the matters. But within a month, another 3-Judges Bench reviews and reverses this interim order for no satisfactory reasons and no additional data or material from any source – making it a test-ban for this year! And, many a scare-environmentalist also rush to defend these SC orders as if the Diwali fireworks alone are causing all pollution but in reality Diwali pollution is not even 1% of annual pollution; motor vehicles, chemicals and other industrial effluents, pesticides, all sorts of wastes, etc. are the major causes. The Court’s revising order has hurt the sentiments and interests of millions of people and some of the graphics above are but indications of the pent up popular anger and discontent. If the Court cannot stand on its own considered judgment for even one month, where is legal certainty in this country? One would not be surprised if such judicial overreach should lead to disastrous consequences. The only antidote is for people in their lakhs to come out, demonstrate and agitate in protest against such developments too as rule by judicial fiat is also no good, and what is to be achieved is real participatory democratic governance.  §§§
Posted by I.M.Sharma at 8:24 PM 1 comment: 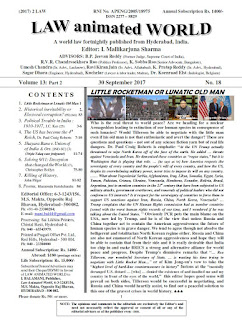 Who is the real threat to world peace? Are we heading for a nuclear Armageddon leading to extinction of our human species in consequence of such lunacies? Would Tillerson be able to negotiate with the little man even if his old man is not that enthusiastic and avert the danger? These are questions and questions – not out of any science fiction yarn but of real life dangers. Dr. Paul Craig Roberts is emphatic: “At the UN Trump actually threatened to wipe off of the face of the earth. He added … threats against and . He demonized these countries as “rogue states,” but it is that is playing that role. … [he says as to] how respects the sovereignty of every country and the people’s will of every country, and how the , despite its overwhelming military power, never tries to impose its will on any country. …… What about Yugoslavia/ Serbia, Afghanistan, Iraq, Libya, Somalia, Egypt, Syria, Yemen, Pakistan, Crimea, Ukraine, Venezuela, Honduras, Ecuador, Bolivia, Brazil, Argentina, just to mention countries in the 21st century that have been subjected to US military attacks, government overthrows, and removals of political leaders who did not conform to US interests? Is it respect for the sovereignty of countries to force them to support US sanctions against Iran, Russia, China, North Korea, Venezuela? … Trump complains that the UN Human Rights commission had as member countries [some] with the worst human rights records of our time, and I wondered if he was talking about the . ” Obviously PCR puts the main blame on the USA, now led by Trump, and he is of the view that unless Russia and China together act to contain the American aggressiveness the future of human species is in grave danger. We tend to agree though not absolve the belligerent and totalitarian North Korean regime either. and are also not enamored of North Korean aggressiveness and hope they will be able to contain that from their side and it is really desirable that too chip in and make BRICS a strong and alternative alliance for world peace and progress. Despite Trump’s dismissive remarks that “… Rex Tillerson, our wonderful Secretary of State, … is wasting his time trying to negotiate with Little Rocket Man…” or of Kim Jong-un’s vow to take the “highest level of hard-line countermeasure in history” furious at the “mentally deranged U.S. dotard … [who] … denied the existence of and insulted me and my country in front of the eyes of the world,”  this editor hopes good sense will prevail on both sides, Tillerson would be successful in negotiating, and Russia and China would heartily assist, to find out a peaceful solution to this one of the gravest crises in world history. §§§
Posted by I.M.Sharma at 8:19 PM No comments: