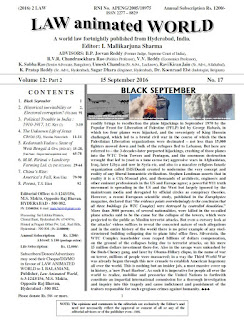 readily brings to recollection the plane hijackings in September 1970 by the Popular Front for Liberation of Palestine (PFLP) led by George Habash, in which too four planes were hijacked, and the sovereignty of King Hussein challenged, which led to a brutal civil war in the course of which the then Palestinian Liberation organizations were decimated – not less than 15,000 fighters mowed down and bulk of the refugees fled to Lebanon. But here are referred to – the 3-decades-later purported hijackings, crashing of those planes into the WTC Twin Towers and Pentagon, and the enormous destruction wrought that led to [used as a lame excuse for] aggressive wars in Afghanistan, Iraq, later Libya and now in Syria etc. and also to a macabre religious fanatic organization called ISIS/Daesh created to undermine the very concept and reality of any liberal humanistic civilization. Stephen Lendman asserts that in reality it is a CIA-Mossad plot, and thousands of architects, engineers and other eminent professionals in the US and Europe agree; a powerful 9/11 truth movement is spreading in the US and the West but largely ignored by the mainstream media and derogated by official circles as conspiracy theories. However, a recent European scientific study, published in the Europhysics magazine, declared that “the evidence points overwhelmingly to the conclusion that all three buildings [in WTC Complex] were destroyed by controlled demolition.” More than 3000 persons, of several nationalities, were killed in the so-called plane attacks said to be the cause for the collapse of the towers, which were projected to the public as Muslim terrorist attacks. But even a cursory look at the attacks’ videos suffices to reveal the concocted nature of such allegations and in the entire history of the world there is no prior example of any steel-structured building collapsing due to plane hits/ office fires. Silverstein, the WTC Complex leaseholder soon reaped billions of dollars compensation, on the ground of the collapses being due to terrorist attacks, on his mere 15 million dollars investment there-for. Also in the savage wars unleashed by the Bush-Cheney gang, and later by Obama-Hillary clique, in the name of war on terror, millions of people were massacred; in a way the Third World War was already begun through this new crusade to establish American hegemony all over the world. This is nothing but an insider job, a most massive cover up in history, a 'new Pearl Harbor'. As such it is imperative for people all over the world to realize, mobilize and pressurize the United Nations to forthwith constitute an impartial international commission for a thorough investigation and inquiry into this tragedy and cause indictment and punishment of the traitors responsible for such egregious crimes against humanity. §§§