69 YEARS SINCE TRANSFER OF POWER 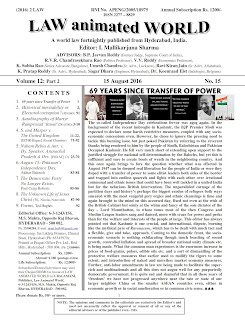 The so-called Independence Day celebrations fervor was agog again. In the background of the recent imbroglio in Kashmir, the BJP Premier Modi was expected to declare some harsh restrictive measures, coupled with any socio-economic concessions even. However, he chose to ignore the pressing need to tackle this burning issue but just poked Pakistan by referring to the reverent thanks being rendered to him by the people of Sindh, Balochistan and Pakistan Occupied Kashmir. He fell very much short of extending open support to the justified struggle for national self-determination by the Balochs, but yet this is sufficient and sure to create bouts of wrath in the neighboring country. And this once again brings to fore the question whether what was effected in August 1947 can be deemed real liberation for the people of India or were they duped with a transfer of power to some elitist leaders both sides of the border and trapped into endless quarrels and fights with each other over irrational communal and ethnic issues that could have been well tackled in a united India but for the nefarious British intervention. The unparalleled carnage of the partition days and history’s perhaps the biggest exodus of refugees both ways smeared with the most vengeful gory orgies and ethnic cleansings is time and again brought to the mind on this accursed day, fixed not even at the wish of the British Cabinet but solely at the whim and fancy of the sole dictator of the day – Lord Mountbatten, to whose tunes most of the then Congress and Muslim League leaders sang and danced, more with craze for power and perks than for the welfare and interests of the people at large. This editor has always pointed out that Kashmir is one crucial, and international, dispute, burning like the mythical pyre of Ravanasura, which has to be dealt with much tact and a flexible, give and take, approach. Coming to the domestic front, the socio-economic scenario is nothing exhilarating though much boasting of sound growth, controlled inflation and spread of broader national unity climate etc. is being made. What the common man experiences is the enormous increase in prices of food-grains, pulses, edible oils etc. and a sort of dismantling of the protective welfare measures that earlier used to mollify the rigors to some extent, and introduction of naked and merciless market economy measures. Further, anti-labor amendments in law are being made to facilitate the super-rich and multinationals and all this does not augur well for any purportedly democratic government. It is quite sad and shameful that in all these years of ‘freedom’ we have not progressed anywhere near the rate or state of our larger neighbor China or the smaller ASEAN countries even, either in economic growth or in social amelioration or in common civic sense. §§§
Posted by I.M.Sharma at 8:08 PM