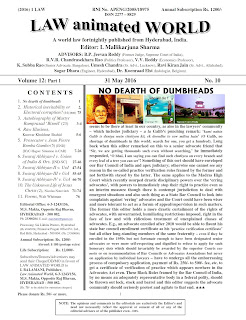 seems to be there at least in our country, as also in the lawyers’ community – which includes judiciary – a la Galib’s punching remark: ‘kami nahin Galib is duniya mein chutiyon kii, ek doondhe to sow miltea hain’ (O Galib, no shortage of dumbheads in this world; search for one, you get a hundred). Long back when this editor remarked on this to a senior advocate friend that ‘Sir, we are getting thousands such even without searching,’ he immediately responded, ‘O bhai, I am saying you can find such chutiyea on every branch and every leaf of a tree you can see’! Something of this sort should have enveloped our Bar Council of India and apex judiciary; otherwise one cannot see any reason in the so-called practice verification rules framed by the former and not forthwith stayed by the latter. The same applies to the Madras High Court which recently usurped drastic disciplinary powers over the ‘erring advocates’, with powers to immediately stop their right to practice even as an interim measure though there is contempt jurisdiction to deal with emergent situations and also such thing as a State Bar Council to look into complaints against ‘erring’ advocates and the Court could have been wiser and more tolerant to act as a forum of appeal/supervision in such matters. The former this editor holds a more drastic curtailment of the rights of advocates, with unwarranted, humiliating restrictions imposed, right in the face of law and with ridiculous treatment of unexplained classes of advocates. E.g., an advocate enrolled after 2010 would be able to flaunt his state bar council enrollment certificate as his ‘practice verification certificate’ but all other long-standing members of the same fraternity – even if they be enrolled in the 1950s but not fortunate enough to have been designated senior advocates or were more self-respecting and dignified to refuse to apply for such honorary slots which should invariably be awarded by the superior Courts suo motu or on recommendation of Bar Councils or Advocates Associations but never on application by individual lawyers – have to undergo all the embarrassing process of compulsory application, payment of Rs. 250/- to 500/- fee, etc. to get a certificate of verification of practice which appears nowhere in the Advocates Act even. These Black Rules framed by the Bar Council of India, by no means an adequately representative body in a federal polity, should be thrown out lock, stock and barrel and this editor suggests the advocate community should seriously protest and agitate to that end. §§§
Posted by I.M.Sharma at 6:55 PM